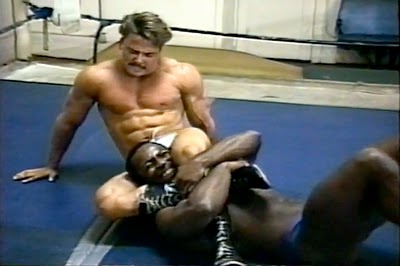 BGWrestle has recently posted some very generous shares from the classic vaults of BG Wrestling. Check out the blast from the past teaser consisting of more than 15 minutes worth of massively thick bodybuilder Steve Sterling in tight, white trunks. This is nice quality for classic clips on YouTube, and it definitely whets the appetite to own more of the prototypical homoerotic wrestling muscle god. 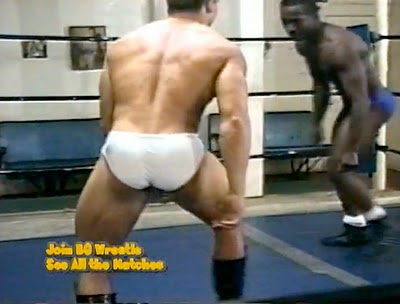 That ass…. leaves me speechless. The BG and Can-Am catalogs nicely document Steve’s rise in the world of gay wrestling, so he’s yours to own from ham-handed god to a legitimately smooth salesman; from relatively demure competitive bodybuilder to full frontal nasty sadist. 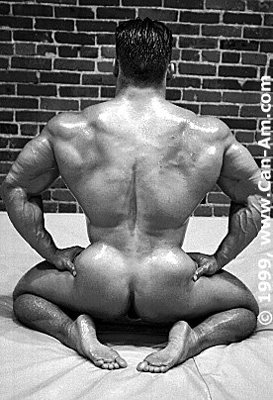 I just have to say it again… that ass…. My, oh my. Steve’s man-handling of a double team in Bondage in Oil 1 opened up so many worlds of ecstasy for me. The sadism, the oil, the bodybuilder on full display, the naked 2-on-1… that’s the foundation for a library of fantasy images and scenarios to come back to, over and over again.

I wonder what Steve was like in real life. He was so physically dominant, his producer’s clearly struggled to find physiques that could legitimately sell anything but a squash. Perhaps my favorite musclegod v musclegod clash of the titans was probably Steve battling with Ramon Villabos in Steve’s International Submissions product. Ramon is more handsome (at least for my tastes) and classically beautiful than Steve, so watching these two stretch and squeeze and pry each other’s stunning muscles is nearly a hands-free orgasm. Given half a chance, Steve could sell a suffer, and up against a couple of the biggest boys in International Submissions, he’s given more than just half a chance. 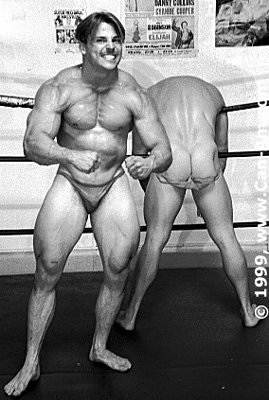 Once Steve firmly established himself as the daddy-of-all musclegods of homoerotic wrestling, he dabbled somewhat demurely into bondage work. Infinite delights of humiliation and power can be found in Steve’s tussle with another favorite musclegod, Scott Randsome, in the Zeus production, Punishment 2. I never get tired of seeing Scott Randsome punished like the bad, bad boy bully he is. When the corporal correction comes from a stashed fantasyman like Steve, it’s a thunderous story of power versus power, flexing, muscle humiliation and screaming destruction.

John Savage and Rants, Roids & Rasslin’ has some nice caps of more class Steve Sterling, with the message that BG Wrestling is, indeed, still open for business.