It’s at this point in my story that I feel the need to clarify something. I have nothing against straight people. Some of my closest friends are straight. When my straight friends want to talk about women, I’m completely available for that. I smile and nod understandingly. I don’t judge. Sincerely, I want the best for my friends, and if that means that they insist on having sex with women, I can accept that. But for someone to ask me to write straight erotica!? Huh? 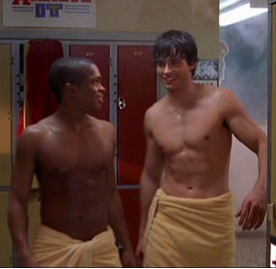 So I chuckled to myself and replied to Jeremy that me, writing straight erotica, would not be in the cards. Women don’t turn me on… at all… in the least… Kinsey 6 (plus extra credit)… the thought of women’s intimate body parts makes me a little nauseous. More power to Jeremy for working out his own particular kink in text, as far as I’m concerned (I told him as much). But as impressively endowed as my imagination may be, I wouldn’t know where to start to write straight erotica. Good luck, Jeremy, I offered kindly.

Jeremy replied that he wouldn’t take no for an answer. So which chick would I probably write for him, Chloe or Lois?

So here’s the way it is. I applaud ballsy, in your face domination, really I do. I’m also entirely supportive of every man’s effort to write his own sexual fantasy. I’m honestly happy to know that there are straight men looking to tap a hot piece of text. But, just as I thought to myself as I brought a forceable and abrupt halt to my chat with Jeremy, first and foremost, I write for my own pleasure. What I write turns me on to write it and read it and share it. As fantastical as it may get, everything I write has more than a little bit of me written into the story. So it’s not as if I just wouldn’t want to write something straight. It’s not as if I’m just a homo-snob and insensitive to the plight of word-starved straight superhero erotica text fetishists (who knew?). But just like the likelihood that my senior high prom date was ever going to see some action with me that night, it just isn’t in the cards for me to write an erotic straight story. It’s just not in me, and I’d never find myself in it. Now, transported into a homoerotic wrestling serial, Superman could, most definitely, find a place in my lustful imagination…