It’s that time of year again. Once again, football fever has struck. This is my second autumn living somewhere that’s truly fanatical about football. I mean, some people should really be embarrassed (but they aren’t). I’m reminded frequently of the close association between masculinity and this particular sport in American culture, because football leaves me limp. My inability to care to express an opinion about the most recent game in casual conversation with coworkers invariably earns me askance glances and shrugged shoulders, and I never fail to feel like my “manliness” just took a hit.  Honestly, for various reasons I’ve watched plenty of football at the high school, collegiate, and professional levels. I’ve felt the crowd-think as the stands erupt in roars of excitement or nearly rush the field with righteous indignation at a blown call. But it doesn’t move me, and I haven’t watched a game in at least a decade.

I do admit that there are some sweetly provocative moments in football, mind you. The huddle, as sweaty, fierce gladiators wrap their arms around one another and psych each other up to crush the other side. The pile on tackle, as muscled men make a mountain out of their assembled bodies stacked on top of the other. The moments of ferocity, the expressions of primal rage, bruised egos, taunting trash talk… sure, I get that. But 9 minutes of standing around for every 1 minute of game play!? Puh-lease.

Of course, fans of Can-Am’s “Football Fracas” classic can attest that football doesn’t have to be such a ploddingly ponderous, padded affair. More skin alone would instantly make me give a shit.

Add a rip-n-strip angle here, and I wouldn’t resent the hardbodied athletes showing up all covered in outsized jerseys and plastic pads. Because assigning points for ripping that shit off would make this more of a full-contact male-revue, and, sure, I’d buy that morning, noon and night!

But honestly, tinkering with the gear won’t stroke me the right way until all of that muscle pounding, head-to-head aggression is unleashed, and tackles turn into submission wrestling. The restrained chaos, the constrained primal man who releases his foe at the sound of a whistle like a trained dog… what the fuck is that!? They want to pound muscles and crush one another, let them go at it, for god’s sake!

Let’s see those muscles flexing, the nostrils flaring, the will to dominate burst the flood gates into full on public humiliation! Stuff his mouth with grass! Slap his flexed ass! Grab his balls to turn the tables!

This isn’t real, channeled physical aggression and man-on-man sport until asses are slapped (in domination), faces are sat on, and losers are wailing and weeping and begging for mercy.

Unleash the beasts and let this shit get real, or stop giving me those looks like I’m so nelly because I don’t care about whether some completely covered, indistinguishable hunk-or-chunk-I-can’t-tell touched his knee ever so slightly to the ground so that even on instant replay (viewed for another 10 minutes), it’s hard to tell for certain. 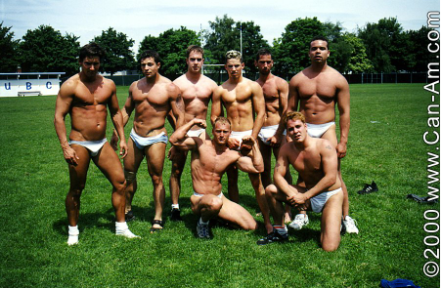 Yeah. I could be a football fanatic, but truth be told, only if it was a whole lot more like homoerotic wrestling.