I just found on my doorstep the biggest haul of BG East contraband, behind-the-scenes stash of candid photos I’ve ever seen in one place. Our Man Inside (OMI) of BG East dropped off way over 100 photos of never before seen shots. This smacks of either astonishingly brash cockiness bordering on a secret wish to be caught, or the move of a man with the law hot on his heels and determined to smuggle out every last possible gem moments before he’s found out. Either way, I sense something ominous in this massive moment of homoerotic wrestling espionage, and I’m sending my most positive thoughts OMI’s way, wishing him good health and an “accident”-free near future.

In the meantime, I’m combing through this treasure chest of a manila envelope and trying to decide how best to organize these homowiki-leaks for public consumption. It should come as little surprise that the large collection of photos of a long-time favorite, Joshua Goodman (that’s Mr. Joshua to you!!!) instantly grab my attention and make my crotch swell. And speaking of swollen crotches… fuck. me. senseless.  Of course Mr. J was immediately a front runner for Best Bulge of 2017 with his early year appearance in Ring Wars 26 wearing a leopard print loin cloth. But take a gander at what these bright red low rise trunks do to accentuate the elephant’s trunk he has stuffed in that pouch! As usual, the heft of his carry on luggage does not entirely fit in the overhead compartment, and the gap between his upper, inner thigh and the fabric of his trunks is precisely the magnificent tease that has made me love/hate/love Mr. Joshua for well over a decade. Again, I say, who the fuck has got what it takes to compete with this for Best Bulge of 2017!?

While OMI did not smuggle out action shots, these shots of Mr. J and Gil Barrios sneering at one another in the BG East weight room seem to strongly imply that Gil may be the next lucky son of a bitch to get an up close and personal opportunity to inspect the dizzyingly sexy body of Mr. Joshua.

And if Gil is the lucky bastard who gets the next opportunity to get his hands on Mr. J’s body, these separate shots I dug out of the massive haul left on my doorstep might suggest that Gil has a hard time handling all that beef Mr. Joshua slaps down on the table. 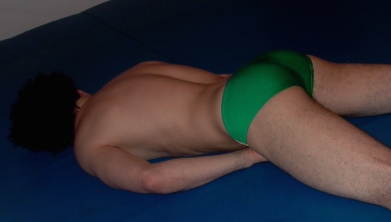 How in the fuck do I preorder this slighty-more-than-hypothetical bout!? Could this be the match that catapults Mr. J back on top of my favorites list, unseating Kid Karisma’s world class ass for the first time in years? Will this finally be the contest in which Mr. J’s long-teased anaconda finally makes its first free range appearance on camera!? As always, OMI leaves us with more questions than answers. But we’re profoundly grateful for your brave service to the fans, OMI, and we hope you survive long enough to smuggle out more gems. If you need a safe house to escape the BG East muscle about to tie you up in the dungeon for your homowiki-leak bravery, send word. Use the codeword “OTK,” and I’ll know it’s you.

I’ll post more of this latest stash of contraband soon…