As I mentioned a while back, I had the biggest drop of BGE photo contraband left on my doorstep a couple of weeks ago. I’ve been strapped for time, so I’m just now sorting through these gems, doing a little latent class analysis to come up with implicit categories, and ready to share a few more.  I identified today’s theme based on the 90 degree/90% humidity hell I’ve been surviving for the past couple of days.  In other words, here are some OMI treasures that I file under both “hot” and “staying cool.”

The phrase “fun in the sun” doesn’t quite capture just how sexy and delightful these photos are of BGE boys at poolside in Florida. By the gear, these pics all appear to be shot around the time of the taping of Wet & Wild 7: Pool Tournament. If you haven’t seen that lovely competition, check it out for the hot bodies, the surprisingly intensely competitive round robin, and the post tourney groping and liplocks.

These post-taping pics of Jonny on clean up duty after the Pool Tournament raise a host of questions. 1) What put a headliner like Jonny in such a doghouse that he’s on janitorial duty? 2) Why the fuck didn’t we get to see the tournament competitors’ trunks come off, since clearly, they came off?! And, 3) what ever happened to those lime green briefs that Drake wore in the Pool Tournament, got fished out of the pool by Jonny, and then reappeared as the prize in the shockingly bitter Babyface Brawl X? After so much sweat and cum was spilled over that hot gear, one wonders just where that sexy swath of fabric ended up. 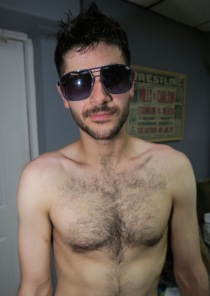 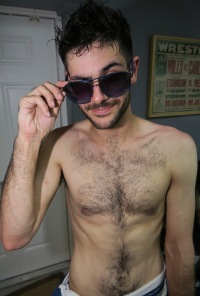 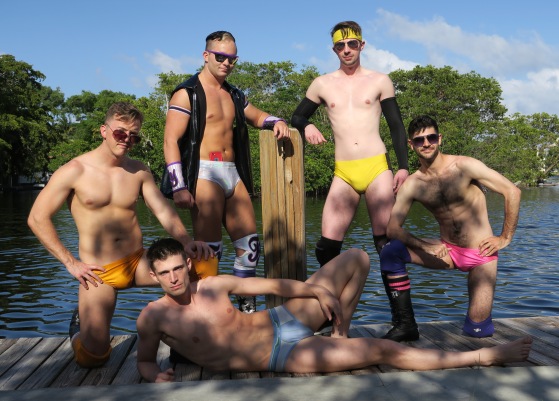 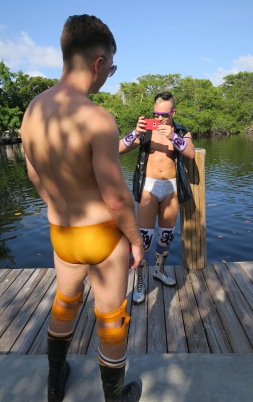 And finally, this latch batch of smoldering hotness I just file under “the future’s so bright, you gotta wear shades.” Baby Boy Leone is wearing me out with his shirtless, hairy hotness and retro, oversized lenses. And the posed, dockside hunkfest is now my desktop image, because it inspires about two dozen homoerotic wrestling fantasies on continuous loop in my imagination, about half of which feature Christian Taylor getting double-, triple-, or quadruple-teamed by this particular incarnation of the boyband.

As always, let’s all voice our gratitude and say a little prayer to the homoerotic wrestling gods for OMI’s safety, so that we may enjoy many, many more behind the scenes treasures like these in the future!