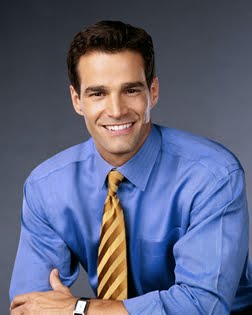 I’m on a hunt. A “man” hunt, if you will. Specifically, I’m in search of the hunks behind the local news desk. When I travel, I occasionally stumble across a handsome face and the hint of a hard body reporting the local traffic or listing the highlights of the day in local crime. Clearly the news is run like professional baseball, with bush-leaguers (usually with chiseled chins and broad shoulders) on rare occasions getting the call up to the big leagues. I remember seeing Rob Marciano smirking out the local weather in Portland, Oregon several years back (does a Portland weatherman need to be able to say much other than “It’s going to rain?”). In a fantastic move, Rob was picked up by CNN, where his fan base has grown ever since. 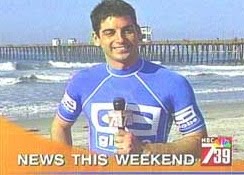 Carter Evans is also a local boy who hasn’t quite broken into the big leagues, but he’s collecting his paycheck from CNN these days, non the less. He was in San Diego for a while, then on location all over L.A.. He has a gorgeously deviated septum, for which I’ve written my own backstory involving his face getting squeezed savagely between some other stud’s muscled thighs. Like Rob, Carter has a quick wit and perpetual smirk that makes him translate well into a cocky character in my wrestling fiction.

Is David Ono still on the air in L.A.? Good God, if there was ever a mild-mannered reporter who I wanted to see rip open his shirt and reveal himself strapped into a spandex superhero outfit, it’s David. I was so thrilled to find this pic of him finishing a triathlon, showing a couple of sweetly muscled, smooth thighs (and sweat… have I mentioned I really like me a sweaty hunk?).
I’m looking for some local news hunks who are ripe for an appearance in my wrestling fiction. Since I can’t be everywhere at once, I’m hoping you’ll help me out with some of your favorite local newsboys. Who’s hot on the local scene, and who do you think would look good stripped down to trunks and tossed around in a wrestling ring?
August 28, 2009July 1, 2013 wrestlebardLeave a comment

I’ve heard a theory that what we grow to lust after as adults is based on what was available during our sexual development in adolescence. In other words, I find wrestling homoerotic because, as an adolescent, wrestling was the only place that I saw scantily clad men in intimate physical contact. I don’t know if it’s true, but I could buy it. To paraphrase Clarice Starling, we covet what we see every day (that’s a creepy line in Silence of the Lambs, but I don’t mean it in a creepy way). 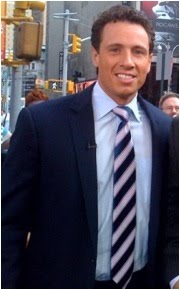 Perhaps that explains my lustful preoccupation with these gorgeous hunks who show up in my home every day – that is, the hunky newsmen on television. Every day, Chris Cuomo – in all his Italian hotness – shows up and smiles out from the TV. It also helps to make an object of lust out of him, knowing that underneath that suit and tie, he’s one stunningly muscled man. My God, look at those biceps and the vascularity in that deltoid! 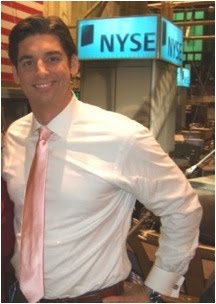 Carter Evans does spots on some local news channels covering the NYSE in the mornings, so he’s also become a familiar hottie showing up in my living room regularly. Those dreamy, bedroom eyes and that adorably crooked nose propel him often into my lustful fantasies. We never get to see enough of these hunks to really satisfy (though thank God for fishing trips!), which is probably why the first wrestling fiction matches I wrote featured newsboys, stripping down to speedos and pounding on the beach in no-holds-barred competition. In fact, the first championship match in my wrestling fiction universe pitted Carter against Chris (you’ll have to sign up to find out who won).

Peter Alexander shows up less frequently in my living room. I’m busy coveting my time with Cuomo in the mornings, so I miss Peter’s occasional reports on the Today Show. But I once saw Peter working out at my gym when he was a local anchor many years ago. He was hot and sweaty and doing hack squats. A sexual fantasy star was born. Peter will have to show up soon in the battle of the newsmen in my wrestling fiction.

In any case, I think the world is full of beautiful men to fuel fantasies and bring smiles. From the hunky news anchor to the hot bike commuter with massive thighs stretching his bicycle shorts to their limit… from the tattooed produce guy at the grocery store to the shirtless jogger with bouncing pecs at the park. It’s a sexy, lustful, beautiful world, especially for a gay man with an active imagination.