There was a period of time somewhere between 8 years old and 10 years old when, rather than immediately flip to toy section of the Sears Christmas catalog, I went straight to the underwear ads. That was probably the most skin I’d ever seen, and I knew that I liked it. A beautiful man modeling briefs is art, whether it’s in Sears or the Met.

Designers of overpriced underwear continue, to this day, exploiting the blatant sexuality of the underwear ad to market a few square inches of thin fabric. God bless him, David Beckham can’t keep his clothes on, it seems, instead displaying his astounding physique over and over and over again for Armani briefs. The classic shot of David wrapped in a huge rope is a fantastically transparent marketing of man-sex. That coiled behemoth hanging between his legs promises that his six pack abs and footballer thighs aren’t the only thing that make David worthy of lust.

Swedish footballer, Freddie Ljungberg, makes my mouth water even more than David Beckham. Freddie tugging at his Calvins makes me irrationally obsessed with buying underwear (must obey Freddie… must buy underwear…). Freddie enjoys the advantage of being Swedish, which gives him an automatic boost in his sexiness quotient. I also get the hit that Freddie is a bad ass, which probably explains his surprise victory in my fictional wrestling match over David. Despite nearly succumbing in David’s crippling figure-4 choke, Freddie managed to knock the Brit out flat.

Towleroad (God bless him, too), recently posted a new ad campaign from Calvin Klein featuring the likes of Twighlight fratboy musclestud, Kellan Lutz. Kellan does more for me in this ad than he’s generally done for me in the past. I think his crotch clawed in one hand and one of those huge pecs clawed in the other could be worth some imaginative energies. 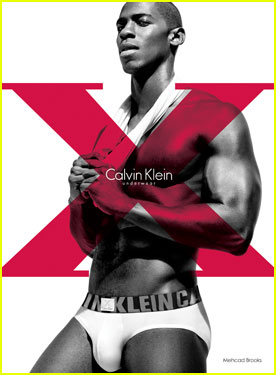 The upcoming Calvin Klein campaign features many more objects of lust for me, though. Mechad Brooks has got to have one of the most stunning torsos ever. It’s a ridiculous oversight on my part that he hasn’t starred in a wrestling match yet. That will be rectified soon. 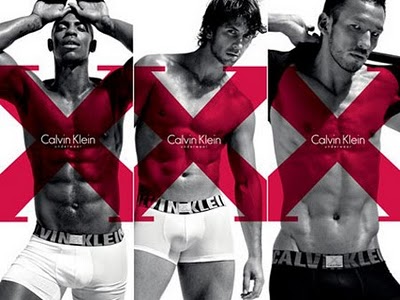 Japanese footballer Hidetoshi Nakata has been on my card for an All-Stars match for some time. This shot of him with his briefs tugged halfway down his hips reminds me that I must find a suitable opponent for him soon. And finally, I’m not as familiar with Ferndando Verdasco, but I will be now. Just try to tell me that shaggy head of hair isn’t crying out for someone to drag him around by it. Just try.
So I know why I get so hot and bothered by hunks in underwear. Other than the obvious fact that a gorgeous body in next to no clothes is an instant turn on, the hot stud in briefs has two vectors of allure for me. For one, it’s another transgressive image, displaying for the world to see (in awe) what is ostensibly a private image of a hard man in his undergarments. To see a man on a billboard fifty feet high in nothing but his Calvins blurs the line between private sexuality and public decorum, and that’s a bit naughty and incredibly nice at the same time. For another thing, this all takes me back to being nine years old, running to my bedroom and slamming the door the minute I could get my hands on the Sears catalog, and having my ears start to ring with the pump of blood at seeing gorgeous men in nothing but their underwear.