I’m hot for deviations. Distinguished deviations from the norm, even the norm of male beauty, actually exponentiate attractiveness in my book. I know I’m not the only one. I remember hearing reports of kids intentionally scarring themselves across their eyebrows in order to look more like heartthrob Luke Perry in the early 90’s. The “imperfection” itself can be what makes someone who is technically beautiful into irresistibly attractive.

I’ve mentioned it before that trenchman newsboy Carter Evan’s dramatically deviated septum makes me weak in the knees. Carter’s dreamy, long-lashed bedroom eyes are enough to make me melt, but that crooked nose drives me nuts and propels him into a very fondly recurring role in my celebrity wrestling fiction. 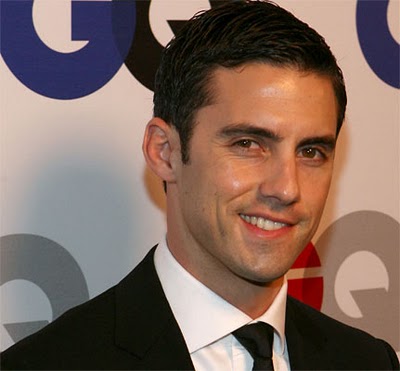 Milo Ventimiglia’s crooked smile is similarly hot. Apparently, he’s had dead nerve endings around one side of his mouth since birth. All grown up, the sideways smile isn’t just his trademark, it’s fantastically sexy. 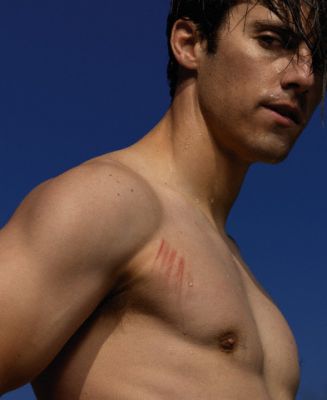 Reconstructed cleft palates frequently, instantly attract me. It’s not quite a fetish, but it doesn’t hurt at all. Joaquin Phoenix insists that his distinctive upper lip isn’t the result of a cleft palate, but that rather it’s a “birthmark.” Hottie Joaquin has also been loony as a junebug lately, so take it for what it’s worth. Regardless, it’s the same effect. It’s distinctive and a deviation from the tyranny of symmetrical standards of beauty, and it turns me on. 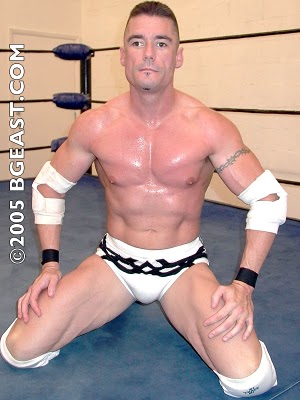 In thinking about it, I came up with a couple of wrestlers who prove the rule that something imperfect makes a hunk perfectly hot. Cole Cassidy looks like he may have a prosthetic right eye (at least, it doesn’t track with his left). There’s so much to adore about Cole, perhaps it isn’t worth mentioning for most of his admirers. But for this admirer, it simply makes him that much more gorgeous. And yes, of course, he’s shown up in my own wrestling fantasies in a stand-alone, fictional story.

Finally, from the BGE vaults I want to mention young, incredibly hot grappler Animal Abban. He doesn’t have his own listing in the BGE roster, and I can’t find his matches on the home page, but he wrestled in the early days of BGE in such backroom classics as Bratpack 7. The intense scarring across his right pec and upper abdomen are really stunning. There’s a serious story there to explain the disappearance of his right nipple and angry red scar tissue (I just don’t know what it is). It’s not like anyone in their right mind would dare suggest that he was anything other than a six-packed, massively armed, gorgeous hunk of boy-next-door meat, but the scars absolutely perfected him.
Beauty is, of course, in the eye of the beholder. I think a diversity of tastes is a wonderful testimony to the wonders of the human imagination and delightful idiosyncrasies that make community happen. The “norm” isn’t inherently bad, I don’t think. Symmetry and mainstreamers can tickle my fancy, too. But by all means, nor is the “norm” inherently good, as most readers of this blog can attest. Vive la différence!