I was a young adolescent when I first stumbled across the local wrestling show on television. Before there were nationally televised wrestling corporations, before cable television offered endless access to wrestling, I began watching the local wrestling show that came on at 11 p.m. every Saturday night. Just seeing scantily clad men grabbing one another would have likely been enough to cement wrestling in my homoerotic fantasies, but it was, without doubt, the appearance of a young Billy Jack Haynes that filled me with homoerotic awe. Billy Jack was huge, with hairy muscles, a slender waist, and an incredible round ass. Watching a physique like that move around the ring was a thrilling moment of discovery for me. This was the hottest thing I’d ever seen. His story lines worked on multiple levels. He was the perpetual jobber: younger, fitter, clearly more athletic than any of his doughy, bleach-blond opponents, but he typically lost as a result of his opponents’ cheating. The plot always worked for me, in that it made me root for Billy Jack all the more passionately. It cemented in me an investment in seeing the classic good vs. evil battle play itself out every Saturday evening, with Billy Jack as my champion. Of course, on a whole different level, it planted within me the seeds of a wrestling fetishist. I was aroused watching him flex and overpower his physically inferior opponents. His signature move was a standing full-nelson, with Billy Jack thrusting his hips into his opponents’ asses and lifting them off their feet. I was even more aroused witnessing this hairy, sweaty, muscle-bound god being picked apart, dominated, and destroyed, as he usually ended up. Eventually, more hot heroes (and anti-heroes) made their way through the local circuit and into my fantasies, notably including Tommy Zenk, the Dynamite Kid, and Lance Von Erich. Billy Jack did a stint in the WWF, of course, and returned to local productions as a heel, getting older, fatter, uglier. But I credit the image of him as a fierce young jobber as the start of my homoerotic wrestling fantasies. 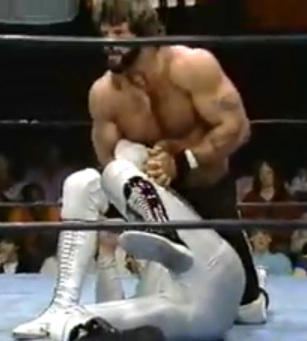