I’m feeling fiercely ambivalent. On the one hand, I’m bitter that BBC Three has premiered season 2 of Being Human without any definite plans yet to air it in the US. I know, I know. US shows almost always have a delayed release outside the US. Still, these captures of Russell Tovey stark naked, coated in mud, and holding his bits are making me raging jealous of the Brits.

On the other hand, the sight of beautiful Russell Tovey naked makes melt some things (my heart, for instance) and hardens others (come on, you know what I’m talking about!). Just between you and me (don’t tell Russell), I’m so much more into vampires than werewolves. Aidan Turner and Alexander Skarsgård can bite and suck pretty much any part of me that they’d like… preferably together… absolutely essentially, with all three of us naked. There are so many hot vampires to fantasize about: Aiden, Alexander, Brad Pitt, Stuart Townsend, Antonio Banderas, Tom Cruise. Well, alright, the only fantasy that I’ve had involving Tom Cruise lately has been a fictional bout in which Will Smith beats Tom Cruise naked and leaves him hogtied (good times).

But I really like the insider-outsider, provocatively philosophical story of Being Human, and Russell Tovey frequently naked pre- or post- getting furry makes the whole thing awfully sexy. Russell plays the antithesis of his primal, animal-like alter-ego. He’s insecure, indecisive, easily whipped and burning with angst. What better character is there to see fall to his hands and knees, screaming and snarling, as he becomes an animal insatiable for sex, food and violent conquest. The story isn’t really so much about a werewolf, a vampire and a ghost, but much more about their humanity (thus, the title). 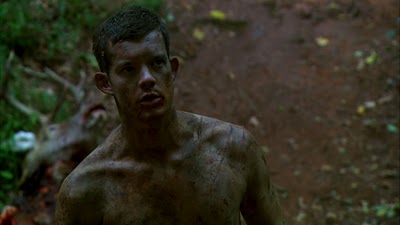 Perhaps another thing about vampires is that they seem to usually be quite clean. I’m just itching to take a wash cloth to sweet Russell when he’s all coated in mud like this. There’s nothing here that a whole lot of scrubbing (and perhaps a little spanking… I’m just saying…) couldn’t make all better. I hate the Brits. I love the Brits. I’m so jealous. I’m so turned on.

2 thoughts on “A Love/Hate Thing”