Skip to content
January 16, 2010July 1, 2013 wrestlebard
I’d thought that, perhaps, I had plumbed the depths of what turned me gay. I’ve already identified 24 independent variables that clearly contributed to producing the gay wrestling kinkster that you see before you today. Looking over the long list, I have to wonder, how could I have not turned out gay!? Surely I’ve exhausted the chain of cause and effect that inevitably turned a young, eagerly impressionable boy gay.

But when capped posted captures of Jeff Bridges from Against All Odds earlier this week, I had a flood of warm, hard, breathless memories wash over me. I didn’t actually see the movie Against All Odds (I wasn’t the target audience at the time). But it came out right there in the middle of my teenage years, when I was frequently surfing through MTV to try to stay hip on pop culture. When Phil Collins’ title song from the movie came out on MTV, I distinctly and clearly remember the brief clips from the film included in the video featuring Jeff Bridges‘ tanned, sexy torso. Like a light-switch being turned on, I was gay.

Much more targeting my demographic, Starman came out around the same time, and I did see it. There wasn’t a ton of Jeff’s beautiful body on display in Starman, but enough to get my motor running. So when he showed up in Phil Collins’ music video soon afterward, I was already primed for lust. 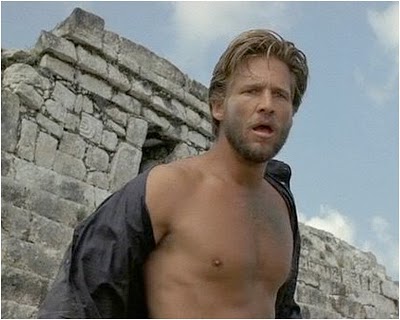 What was Against All Odds about, exactly? I still don’t know. In my mind, it was a gay sexual awakening film that included lots of scenes of some studly sadist-master ripping Jeff’s clothes off him and throwing him around by fists full of his long, bleach-blond hair. That wasn’t the plot of the movie? Don’t tell me. I’m 100% certain I like my version better.

Bridges has been a skilled and prolific actor, and I always enjoy seeing is work. That said, he hasn’t actually done anything “for me” since the 80’s. From seeing him squeezed into a skin tight body suit in Tron (holy hell, the fantasies of Bruce Boxleitner and Jeff Bridges in a NHB smackdown still make me swoon), to his childlike, yet hardbody appearance as Starman, to his tanned, glorious shirtlessness in Against All Odds, he had quite a run of making me stand up and take notice. These days he’s all daddy, and that can be entirely hot and heavy. But he just isn’t my daddy. So I remember him more as the older kid down the block, pulling me into the woods to unbotton his shirt, invite my gaze, place my hand on his smooth chest, and teach me that a hot, hard, hunk of a man is a thing of beauty. 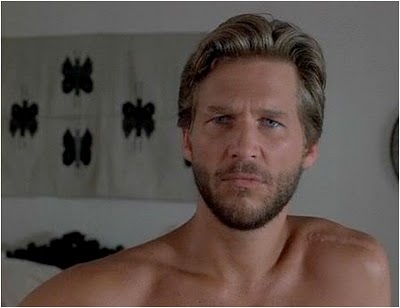