I really do appreciate your patience. Some of you have been sending me emails asking when the secretarial pool tournament will start in the Producer’s Ring. I hope to post the first match of the tournament later today. To recap, you the readers selected our 8 finalists to participate in an elimination tournament to determine who will be hired as Brody Productions’ new executive assistant. The voting was enthusiastic. The nominees were all highly qualified. But in the end, as always, there were winners and losers. 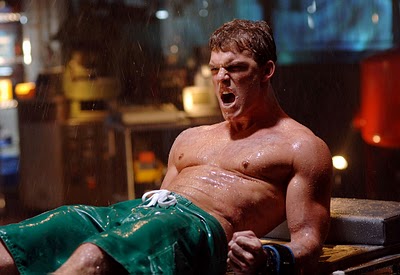 The first match of the secretarial pool tournament pits blond ambition against tall-dark-and-handsome. 6’2″ Alan Ritchson is making a play to step behind the camera and get a piece of the real action in the entertainment industrial complex. 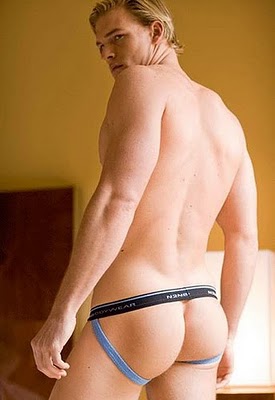 Alan has received abundant exposure through both his modeling work and television credits. Clearly everyone recognizes what Alan brings to the table: that huge, smooth body, and in particular that squeezable, round ass. 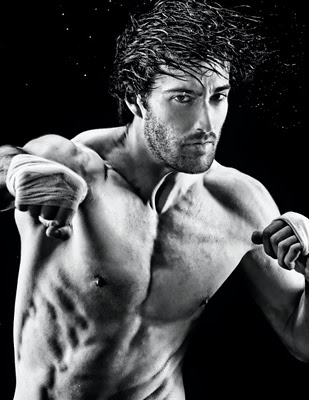 What will determine whether Alan claims victory or falls to disaster is the 6’3″ beauty, Jared Prudoff. Jared’s glowing brown eyes and gorgeous stubble are entrancing. He’s a long, lean fashion model with unbelievable abs.

I applaud any runway fashion model that keeps it hot and hairy. Jared clearly trims extensively, but that chest, lower abdomen, and those legs are fantastically fur-lined.

Is it me, or is Jared frequently showing off his pits? Not that I’m complaining, of course. And the shots of his amply filled package illustrate that Jared’s got the necessary equipment to impress in the Producer’s Ring. The only question is whether those abs, the legs, and his overt sensuality will be enough to overcome the freight train that is Alan’s body, butt and assurance of his own destiny to succeed.

One thought on “Let the Games Begin”