I’m not going to harp on this long, because you’ve heard it before, and I sort of suspect I may be the only one that really gives a damn. But I notice with Rock Hard Wrestling’s newest release that BG East’s Skip Vance has entered the ranks of the recycled homoerotic wrestlers, showing up for RHW as Jeff Hollister. 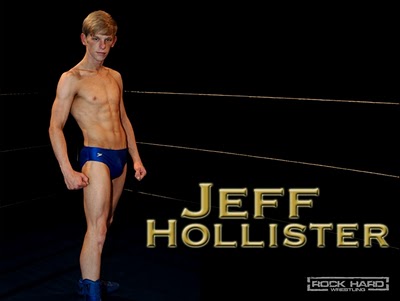 One promoter has suggested to me privately that there really is a relatively small pool of fit, hard hunks willing to strip to nothing (or next to nothing) and wrestle for a primarily gay wrestling fetish audience. Can this really be true? Of course, not everyone has what it takes to make a go of it in homoerotic wrestling, and I’m sure if you’re just looking to moonlight, being immortalized in digital recording in a scenario with at least a nod to eroticism could very well have implications for any other career. 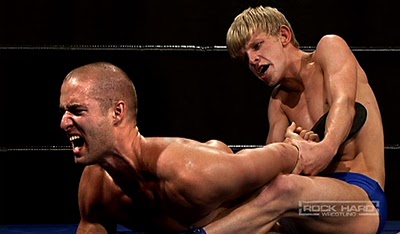 But on the other hand, I have a hard time entirely believing that the pool of young, randy hard bodies itching to capitalize on their six pack abs is quite so tiny. I’m not trying to imply anything at all against the hardworking hunks who’re signing on the dotted line for multiple wrestling fetish operations. Cameron Mathews, Rio Garza, Zack Johnathan, and more recently Donnie Drake, Paul Hudson… the list goes on and on. Ride the horse as far as it’ll take you boys, and more power to you. 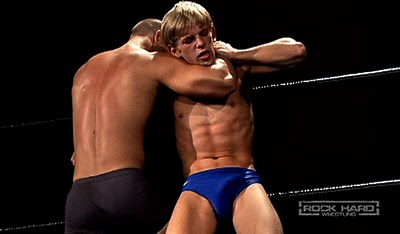 But personally, I definitely have a preference for two other personnel management strategies over the promotion of the same boys, often fighting the same boys, often released around the same time. First, I’m a fan of character development. The erotic potential of tracking a homoerotic wrestling character over time is what can transform a wrestling fetish product from a quick top off into actual entertainment. I like it when a homoerotic wrestler has a good working relationship with a given promotion such that he can stick around for multiple products over time, and his aptitudes can be understood, appreciated, evolved and built into a story. My dollar and cents will tend to get invested there. 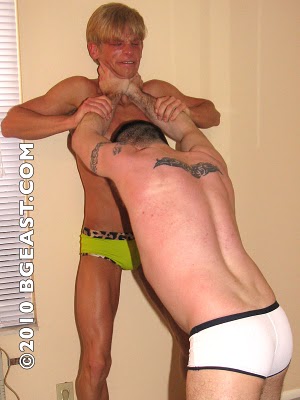 Second, when I catch a hot, fresh face showing me something new, I’m often eager to jump on that train as well. I hope that I’m not alone when I invest in the end product of good, old fashioned talent recruitment and development. If I am alone, perhaps that explains the penchant these days to reduce, reuse and recycle a few boys from company to company. 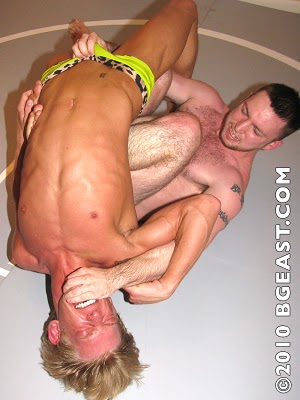 Much farther down my list of what I’m looking for in new releases are familiar faces only slightly retooled and packaged with a new return address label. All this chatter from me, I realize, is probably overkill for a product I haven’t even seen yet. In fact, Jeff/Skip’s opponent for RHW, Max Powers, looks like he may be exactly the fresh, hot new element that I’m talking about. And I’m not even going to bother dissecting whether Skip/Jeff compromises the promise of exclusively handsome, rock hard Abercrombie boys populating the RHW world. I’m just feeling the need to grouse a little. That’s for cutting me a little slack.