There’s little that can warm up the chill of winter better than a tight, hot homoerotic wrestler with an unbelievable ass. Jimmy Royce is made to order for sub-zero temperatures, as far as I’m concerned. At 5’10, 180 pounds, blond and blue-eyed, Jimmy wrestled in 7 of the prototypical Can-Am franchise products, Canadian Musclehunk Wrestling (both in and out of oil). I’m warming up just thinking about him.

Jimmy surely gets major credit for enticing me to purchase my first homoerotic wrestling product, Canadian Musclehunk Oil Wrestling 3. More to the point, Jimmy’s ass gets the credit. I still don’t think I’ve seen anything quite like it since. I’m not sure what physical activity a young 20-something pretty boy has to engage in to develop glutes like that. Dancing, perhaps, though I think his legs were relatively underdeveloped in comparison to the astonishing development of those massive, muscled ass cheeks of his.

Wedgies were simply impossible for Jimmy to avoid when he climbed into the ring or oil pit. In fact, before any physical contact, he’d often have at least one of those gorgeous glutes squeezing free from the ridiculously inadequate dimensions of his speedo.

His backside was so eye catching, one could be excused for taking a little while to appreciate the stuffed basket he sported up front. Jimmy was next to none in managing to just barely wear his gear, his cock and balls appearing at any instant ready to pop out of his trunks. Particularly in oil, with his trunks nearly disappeared between his lightly hairy, epic ass cheeks, his speedo stretched so tightly across his crotch that every contour, bulge and crevice was outlined as if with a highlighter.

My hunch is that Jimmy had some legitimate amateur wrestling in his background. He frequently seemed to be working points by exposing his opponent’s back to the mat or mentally keeping count of his riding time, which is obviously nearly pointless in homoerotic wrestling (unless we’re talking about an entirely different type of “riding time”). He was also frequently undone by distinctly non-amateur tactics, such as the inevitable position Jimmy seemed to always find himself in, with his ankles trapped in his opponent’s hands while his opponent shoved his foot high and hard up his ass. 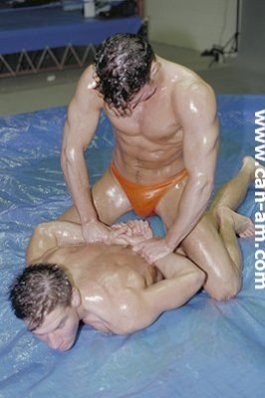 A reader recently asked me if I’d thought about posting more about the aural aspects of homoerotic wrestling, the grunts and slaps and thumps and groans. Of the abundance of delights in Jimmy’s match with Beau Hopkins in Canadian Musclehunk Oil Wrestling 3, the most erotic for me by far was when Beau had Jimmy caught for the umpteenth time on his stomach, both arms wrenched painfully behind his back and pried nearly up to the base of his neck. He was helpless against this move from Beau, and the smirking baby heel milked it relentlessly. Straddling that world class ass, Beau held onto Jimmy’s wrists and bounced his weight up and down over and over, driving Jimmy’s face repeatedly into the oil soaked mat and threatening to pop Jimmy’s shoulders entirely out of joint. Jimmy’s grunts of pain were squeezed out of him in rhythm with Beau’s sadistic bouncing. At first, the air came rushing out of Jimmy’s lungs in low, strained gasps. After about half dozen or so bounces, though, Jimmy’s voice suddenly rose an octave and a half with what had to be genuine pain and a twinge of panic. The last two guttural gasps were more like a primal pleading for mercy, as if signaling to Beau that he just pushed the fun and games a fraction too far. The nasty heel planted on Jimmy’s wedgied ass did, indeed relent, but only with a cocky smirk and sneering chuckle as he reveled in his precise control of Jimmy’s beautiful body’s tolerances.

Jimmy wasn’t the biggest homoerotic wrestler. He wasn’t the most muscular, or even the prettiest (though pretty he was). He might qualify to be in the running for the best ass in homoerotic wrestling, but even there he’d have stiff competition. But Jimmy was a hard working classic, and he can turn me on today every bit as instantly as he did 14 years ago.

3 thoughts on “The Classics”