Like most people, I hate signing contracts. Whether it’s for cell phones, cable or the gym, companies love to lock us in then treat us like crap. BGEast is the exception, of course. They have a contract I was happy to sign. Not just once, but a whopping nine times. 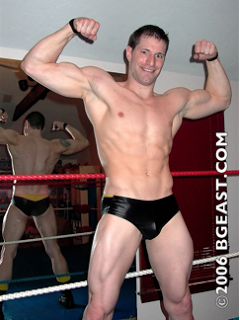 For those that don’t know, The Contract is a fantastic series that stars Brad Rochelle, a true superstar. If there were a Hall of Fame for BGEast icons, he’d get in on the first ballot for sure. This is Brad at his best – believable as face and heel, victim and victor, dominator and jobber.

I love Brad’s nearly unmatched range in skill, attitude, flexibility and personality. He’s at his bendy best throughout. The beatdown from the Enforcer stands out for me, as does Brad’s initiations of studs like Alexi and Braden.

I love the long form storytelling aspect, which is so unique. Rock Hard Wrestling and Thunder’s Arena do have wrestlers reference past encounters, but it’s not quite the same feel.

I love the evolution of Brad’s character during the series from hapless victim to malevolent mastermind.

And I love Brad’s opponents. They include a who’s who of BGEast talent, from established stars to emerging talent to debuts by future favorites:

Unless I missed one, the ending for The Contract is left to the viewer to imagine. Brad gets ratted out, as KL is told what’s going on, but his wrath is never seen.

I’d love to see more series like this. Given the way these things work, what any company should do is either complete the entire series in one filming or at least film a concluding chapter in case the rest never gets filmed. I think people would be forgiving of changing bodies and hair styles to get closure. We’re used to it.

What are your thoughts? Love or hate The Contract? Would you like to see more series? Weigh in through the comments!
~Alex

2 thoughts on “A Contract Worth Signing [Guest Blogger: Alex]”