I’ve had an opportunity to share quite a bit of BG East reflections recently, and there’s even more to come. Today’s tidbit from homoerotic wrestlers in real life is a surprising departure from the typical neverland fare.  Now, you know how I love homoerotic wrestling. And casual readers will remember well how much hot, hunky actors in mouthwatering drama can yank my shorthairs and ignite my homoerotic wrestling imagination (ahem, Alexander Skarsgård).  Apropos of little, I received a notice in the mail several weeks ago inviting me to a performance of the Merchant of Venice as a benefit for the theater department of a New England university.  Random? It looked like it. But then I noticed who was starring in the role of Shylock: none other than The Boss, Kid Leopard!

It should come as a surprise to no one familiar with BG East that KL is an accomplished and acclaimed figure in the dramatic arts. Just as no one should be surprised that he can portray a classic figure of complex villainy like a headliner. I mean, did you see his appearance in Wrestlefest 2, when he “presented” the lifetime achievement award to DW by bashing the astonished hunk in the head with it (how dare anyone presume to win a lifetime achievement award before The Boss does!?)? KL’s flair for the dramatic is what makes the Contract series such a popular odyssey, culminating in the monarch himself literally mounted upon his throne, with his henchmen forcing a humiliated babyface hero to kiss his feet (well, really culminating in the hero’s retribution of flushing the monarch’s head in the bidet and ripping up the accursed contract forevermore!).

While I was sadly unable to get my ass into a seat to see this performance, I did score some production shots from Shylock himself.  A local paper noted that this was KL’s reprisal of the role of Shylock, after having played the part first at age 14.  Seeing these stills from the stage is such a trip! The mash-up of Shakespeare and pro wrestling seems, on the one hand, entirely improbable.  Then again, on the other hand, have you seen much Shakespeare!? The nuance, the bluntness, the sadism, the humor even in the darkest tragedies… the costumes! Of course these two worlds merge seamlessly in the artistry of the man who Shane McCall recently summed up with the wisdom, “Make it and make it BIG, and do everything you can to be sure it sells!” 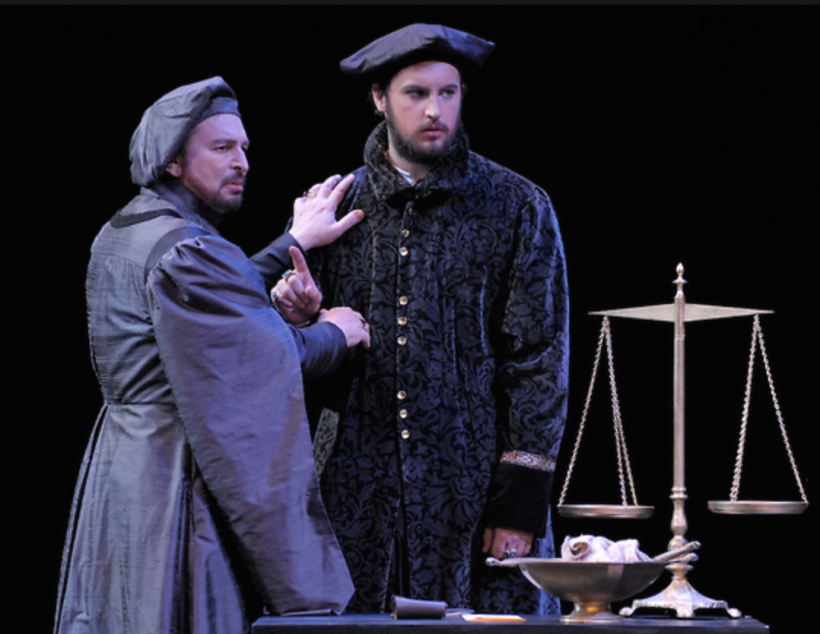 Arguably even more titillating for this homoerotic wrestling fan were the photos of the parade of homoerotic wrestlers who paid homage to The Boss by soaking in the work of the Bard (the other one) brought to life by master showman himself, Kid Leopard. I posted a leaked preview pic of one of those collections of homoerotic wrestler theater-goers about a week ago.  Here are just a few more of the hot hunks of wrestling who know good drama when they see it.

I’m deeply cynical about professional theater reviewers, but I couldn’t help but be fascinated by what a crew of beautiful, thoughtful homoerotic wrestlers might have to say about the Merchant of Venice and the performance of The Boss.  I’m still soliciting reviews, but here are a few that I’ve collected thus far, including profound surprises and insights.

“It was good!  Every time he did one of his finger waving poses, I was like, damn, I’m gonna be on the other end of that since I’m kinda the new houseboy. But the entire cast was great. KL really fooled people, too. He brought Shylock to life really. With his actions and with his accent. He was supported by an amazing cast, also.”  – Ty “the New Houseboy” Alexander

“Enough comedy to keep the audience from being weighed down by the drama of debt, marriage and potential death, but not so much as to keep us from caring or fearing for the fates of some of the characters.  The Boss takes his Shylock and makes him just sympathetic enough, albeit lacking in ethics, that we enjoy his scheming nature as much as we disagree with it, at least until we find fault in his pursuit of revenge which comes across more petty and spiteful than is justified.  It adds complexity to a character that has at times been portrayed altogether comically or else monotonously evil. We learn to hate him for his actions rather than simply accept that we are supposed to hate him for his label as villain. Admittedly any impression of the Merchant of Venice is unlikely to remain uncolored by modern social views. Shylock is hated as much for his heritage as for his business dealings, and the laws in the time of the play’s setting prevent him as a Jew from most professions apart from moneylending. His grievances seem legitimate since his rival is a merchant that lends money freely to people so they need not be indebted to Shylock: good for them, but this does directly deprive Shylock of his livelihood. Taken out of context or rather in a modern context, the characters come off fairly prejudiced, and Shylock’s greatest fault is simply pursuing his vendetta to the death of his rival, the sins of wrath and pride as it were.”  Drama Critic Kayden Keller

“Shakespeare wasn’t really brought to my attention until I was old enough to chose my own reading material. I had zero exposure to the arts growing up in the city and being in public schooling. I do like theater and like the interesting plays that have depth. The Merchant of Venice is one story that I have always thought had great depth and complexity. KL as Shylock was fantastic. His acting, delivery, and overall GRAVITY on stage was wonderful. I think it’s a great part for him, the perfect part really.  All the players did well, and overall it was very well done, but for me KL as the heel was a rock star. The staging was pretty simple in normal lighting, but somehow worked out surprisingly well. The performers made very good use of the space, and it turned out to be very dynamic. As far as ties go, I typically don’t wear them, but I don’t mind dressing up on occasion. As far as being ganged up on, we all had an understanding that the day way about KL, Shylock, and Shakespeare. If any or all of them want to take other issues up with me, we can do it in the ring.”  – Brad Rochelle (responding also to my question of whether The Boss and his boys capped off opening night by ganging up on dapperly dressed Brad)

If I can beg reviews out of Kid Vicious, Jonny Firestorm, Dark Rogers, or TNT Horrigan (who I’m told attended, though doesn’t appear to be in any of the photos I managed to track down), I’ll be thrilled to post them as well.

Before I let this night with the Bard go, I also feel compelled to reflect on the humanity of the men (I so often playfully call them boys, but make no mistake, these are all men) who step so masterfully into our homoerotic wrestling imaginations and move and motivate and draw out of us astonishing depths of pleasure, humor, outrage, and awe. Occasionally I deny comments to this blog from people who take it upon themselves to level unconstructive and quite personal criticisms of the stars of homoerotic wrestling fare, tossing catty comments about bodies, proportions, intelligence, and even deeper aspects of character.  In the years since I began blogging about homoerotic wrestling, I’ve been profoundly humbled and deeply honored to get to speak with several and meet a few of them face-to-face, and without fail, every one of them delighted me as an interesting, 3-dimensional, highly intelligent human being who, oh, by the way, can turn my crank in the blink of an eye with their stunning good looks and willingness to star in hot wrestling dramas. Not to name names or specifics, but these gentlemen also have insecurities and self-doubts, but at no point am I aware of any homoerotic wrestler who has in some way deserved to be treated as anything less than a delightful human being. These are athletes and artists, sons and brothers, scholars and innovators, and as richly nuanced and full of surprises as anyone else that you or I care about and respect deeply. What these photos and reviews highlight for me is that what makes the art on stage (and in the ring) so compelling is almost certainly related to the depth of character and artistry of these men off stage (and out of the ring), but we who sit in the seats should not permit our suspension of disbelief to confuse the reality that the objects of our wrestling fantasies are flesh and blood, with talents and interests and insights that we will likely never witness from row J seat 15 or from the confines of our wrestling viewing lairs. From The Boss to each of these wrestler-reviewers to every homoerotic wrestler I’ve ever met, I am profoundly honored by the opportunity to not just be a fan of your wrestling, but of your humanity as well.