The Best of BG East in 2016 has already been announced! Damn, that was fast. Clearly, I get into awards season heavily, so of course I need to debrief.

Biff’s ascendancy to the throne as Top Babyface is a remarkable rise for last year’s Debut of the Year winner. Seriously, we’ve been lusting after this gorgeous muscle man for less than two years! And just like that, he steps in, yanks the title from longtime title holder Jake Jenkins, and slaps JJ to the curb. There’s a reason that I let alliteration go fucking nuts when I’m talking about big, blond, blue-eyed, buff, bulging, beautiful babyfaced Biff.

With no defending title holders in the pool, Chace LaChance muscled his washboard right onto the throne as having the best abs. I had guessed that Chace might leverage his army of body worshipping fans to fill this vacuum.

Fuck, yeah! I have been arguing for years that Kid Karisma had the best body from top to bottom, and I’m thrilled that the court of public opinion has finally agreed with me. Last year’s winner, Chace, wasn’t even nominated, which certainly begs the question of who would fans want to worship more today. And there’s absolutely no other possible way to resolve this question than a jock strap wrestling match in the ring. And I STILL say Kid K’s body would rock the competition out cold.

Honestly, I’m unaccustomed to being so much in the majority when it comes to the Besties. But like me, a whole lot of the rest of you also noticed Kirk Donahue’s gargantuan bulge this year. I can think of no hotter scenario than Pete Sharp and Joshua Goodman (that’s Mr. Joshua to you!) coming back in 2017 for a 3 way bulge off.

I’m shocked and aroused to learn that Guido Genatto just got beaten by Jonny Firestorm for the title to Top Heel. I said that if anyone could do it, it would be Jonny. Guido is loud, and huge, and nasty, but Jonny just shut the Dirty Daddy up but good by taking the title.

Again, I say, fuck, yeah! At what point do we just name this the Kid Karisma award? I’m thrilled to be with the herd in getting behind (and I mean, close behind) Kid K’s glorious glutes for yet another year as Best Butt. I know of at least 2 former contenders who didn’t get nominated who are bitter as shit, but not me. I’m just leaning back, a little light headed, and soaking in the sight of the Eighth Wonder of the World, Kid K’s unsurpassed ass.

Again, I was consistent with the popular vote in calling Ty Alexander Top Jobber yet again. On the one hand, it’s a dubious distinction to be a Top Jobber repeat. No one exactly likes to lose, do they? On the other hand, a jobber of Ty’s quality can make even a train wreck of a match compelling. And I predict that if he keeps that bleach blond ‘do, he’ll get his ass spanked relentlessly yet again in 2017.

I hedged my bets big time in the Debut of the Year category, but true enough, my vote didn’t swing things Chase Addams’ way. Instead, it was one of the other hot newcomers I thought was in contention taking the title this year, rock hard Beauxregard. I love what he brings to the table, and I think all of BG East is better for it. I’m looking forward to seeing what big Beaux accomplishes in 2017.

Congratulations to Jonny and Calvin for taking the enigmatic title of Best Submission of 2016. I had my eye on another contender, but it’s not so surprising that the bad ass who just took the title as Top Heel would lock down the Best Submission follow up. And there’s no arguing that he fucking brutalizes doe eyed babyface Calvin.

A hearty congratulations to Kayden Keller and Debut of the Year winner Beauxregard on taking home the title for Sexiest Match of the year. It was a scorching hot field of contenders, and though I didn’t side with the majority on this one, there’s no denying they slapped down what was almost certainly the most explicit, sweaty, sexy assed heel on heel beatdown of the year. Well earned praise for KayK and a super hot haul for Beaux’s first year in the business.

I wasn’t playing coy with just how infatuated I was with this match, so I’m thrilled no end to see it take the Best Ring Match title. If even one of the four of these young studs was a weak link in the chain, a complex tag team melodrama like this could have easily been a dud. But every one of the wrestlers in this match earned every praise and every award it got. Now when do we get to see Team All-Americans tear into the tag team ranks again?

Kip Sorell got squashed like a bug by Flash LaCash, and fans picked it as the best of 2016. I’m generally lukewarm on this genre in general, but I get it. This is a hot match. My vote went elsewhere, but I’m so not in the mainstream when it comes to squashes in general, I’m not too surprised.

This was a close second choice for me, but I was irked not to get a chance to vote for what I thought was an even sexier Drake Marcos match. In any case, kudos to Drake and Ethan for nailing down this victory with gallons of sweat and tears and some damn fine mat wrestling. This was super competitive, brutal, and sexy as fuck.

I didn’t vote with the majority in this category, either, but there’s no denying the remarkable passion in that pumping, grinding, grunting make out session between Christian Taylor and Calvin Haynes. I’m thrilled to see both Christian and Calvin starring in multiple award winners this year. And when it comes to liplocks, really… is anyone a loser?

Chace continued to show off his blazing fan power with a win in the category of Best Spotlight. I had this as a third place on my score card, so I clearly broke with the herd. But the definition of a wrestler spotlight is fan power, so congratulations to Chace and all of the opponents who made this DVD a winner. 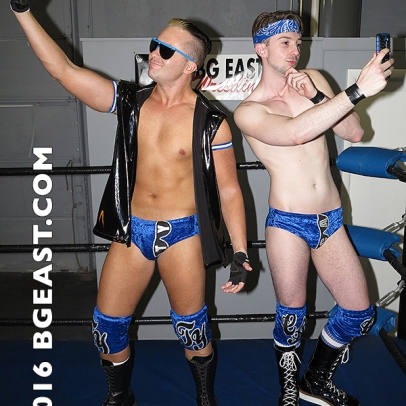 You don’t know how thrilled I am to see fans select the opening match of Tag Team Torture 19 as the Best Overall Match of 2016. It got universally rave reviews from all of us who take the time to blog about this stuff. I’m pleased as punch that fans were of like mind with us bloggers, and I hope it does nothing but push for more tag team matches, more selfies, and much, much more of Christian Taylor, Charlie Evans, Ty Alexander, and Chase Addams.

Congratulations to everyone who won, and to all the nominees. It was an outstanding year at BG East, precisely because everyone in front of the camera and everyone behind the camera did such an excellent job producing high quality homoerotic wrestling of that flavor that only BG East can quite manage. I would argue there are no losers here.

2 thoughts on “And the Winner Is…”