Of course, I like them blond, tanned, and pretty. I like a wrestler with massive, broad pecs and a muscled ass. I like them confident and earnest. But then comes along someone like Royce Perry and I just can’t help but take an instant disliking to him. He’s too blond. He’s a fraction too tanned and pretty. His pecs are too perfect. He’s tilted just over the edge of too much confidence, too much earnest attention on the overall arc of his wrestling career. A little like I have a raging desire to watch Kirk Donahue get broken in half, I’m developing a taste for watching Royce’s dazzling beauty and obvious pro wrestling skills take a humiliating kick up that glorious ass of his. 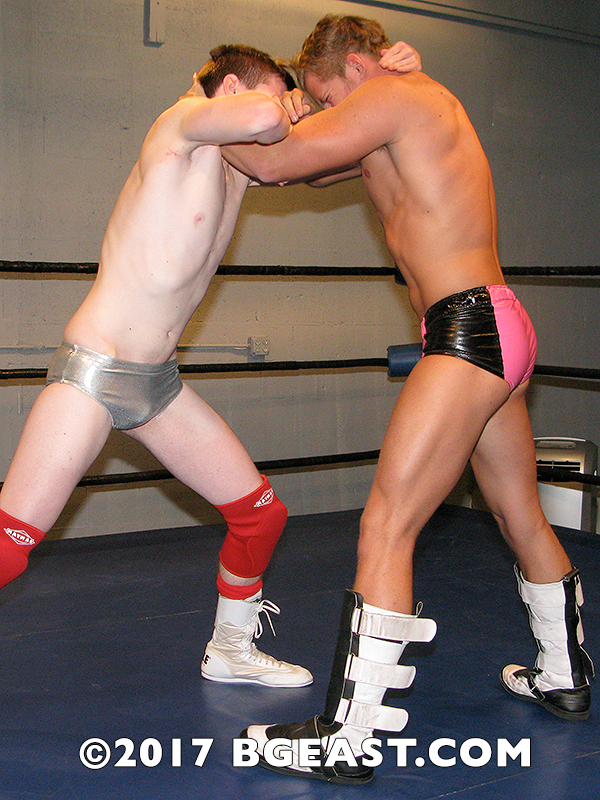 I was surprised by how much satisfaction I took watching Zip Zarella beat the living shit out of Royce in their debut. And showing up for his follow-up match in Ring Rookies 5 on the heels of that first outing, Royce just keeps rubbing me the wrong way. There’s a bully-quarterback vibe about him as he scoffs and smirks at his newbie opponent, handsome lightweight Cap Landon. I immediately translate this confrontation to the über-popular prom king jock cornering the skinny, adorkable president of the AV club out back behind the bleachers, intent on tormenting the nerd.

Maybe that’s what Royce had in mind stepping into the ring with whittled down, painfully pale, handsome Cap. They shake hands, and then instantly the pretty boy starts to muscle bully the lightweight. Cap doesn’t go down willingly, and so abruptly, dazzling Royce grabs the newbie by the hair and slams him face-first in the mat. “Give up, kid,” Royce advises half-heartedly, like he’s clocking in at the assembly line and already half-bored with the inevitability of his victory. So when Cap shimmies into position to snap those lean, pale legs around Royce’s head, I’m pulling hard for the revenge of the nerds. The headscissors are lush and lingering, grinding into Royce’s excessively pretty blond head. “Yeah,” Cap spits and sneers, “how’s that for a kid?”

For the record, Royce rides roughshod over Cap a lot of this match. The kid is reportedly giving away around 40 pounds of weight, which is surely mostly accounted for in Royce’s massive, meaty pecs and magnificently round ass cheeks. But what I particularly like about Cap is that he’s not the fresh meat that Royce clearly thinks he is. He’s astonishingly skilled, executing reversals and neutralizing counters like a seasoned pro. And he’s got and adamantium-coated core, because the more Royce bullies and dominates him, the more Cap gets smart-assed and determined not to give the quarterback the satisfaction. Royce snap suplexes him, and drags him up by a barehanded choke. “Now you’re done,” Royce announces. “No I’m not!!!” Cap growls past the choking hand around his throat.  Royce flexes his bulging biceps seductively, hips twisted slightly to the side to show off his incredibly lean waist, washboard abs, and tapered V torso. It’s so douchey. “You look like shit!” Cap snarls, and it makes me crush on him that much more. “Your body sucks!” he insults what is obviously the quarterback narcissist’s most vulnerable attribute: that annoying ego. Royce shrugs and smirks. Again. That fucking smirk. “Your mom loves it!” Royce pulls out that old douchey yo-mamma angle to insult the kid he’s bullying.

At this point, it should come as no surprise to learn that I’m hard as granite and ready to pop a load right around the time that Cap suddenly leaps on Royce’s broad, muscular back, and wraps his lean right arm across the quarterback’s throat.  His lean, stark white legs wrapped around Royce’s Coppertone torso dig in tight, latching on and locking down the stumbling jock good. “Nothing to be embarrassed about,” Cap taunts, his lips hovering near Royce’s ear, “just tell me you give.”  Of course, there is something for Royce to be embarrassed about. He’s getting owned by the president of the AV club. He’s got a two and half stone weight advantage, and he’s been told by everyone, his entire life that he deserves everything, that slapping around the plebes are just part of the privilege of being the top jock on campus, that his ascendency is foreordained. Honestly, I’m already cumming when Royce half sags under the weight of Cap and chokes out the first fall, totally shocked submission. I’m still shooting when Cap doesn’t let go for a few more seconds, dragging Royce right to the edge of getting choked out cold not 5 minutes into the match. But he lets him go finally, and walks away slowly, hands on hips, cocky as fuck. Nice work, Cap.

Lest I leave you with the mistaken impression that Cap does to Royce what Zip did, let me be clear: Royce wears the ghostly pale lightweight down to a nub in the end. But I love it that losing that first fall is so clearly, irritatingly way up underneath Royce’s skin the entire time. “You got lucky!” he bitches and whines like a spoiled rotten daddy’s boy. He keeps pounding him, keeps flexing, keeps taunting. Cap splayed out and completely vulnerable in an OTK backbreaker deserves a sculpture in the Louvre. Even a bitter case of “fuck-you” stubbornness and shockingly compelling ring skills can’t keep a rockin’ sexy nerd with a plan like Cap in the mix for long.

If I’m being completely honest here, I have to admit that the second hottest moment of this match is right around the time Cap is actually dragging his battered body as quickly as possible to the ropes to try to flee the scene of the mugging that this has become. Despite myself, my cock aches as Royce drags the skinny nerd back by a fist full of hair, flinging him into a turnbuckle and flexes in his face.  “You…” Cap gasps for air, eyes half-lidded, knees wobbly, hanging from the ropes, “you… flex like a bitch!”

Fuck, I feel a little guilty for how much satisfaction I take at Cap remaining a smart ass to the bitter end. It earns him a brutal ass whooping. Royce crushes him and then rubs salt in the wound with a slow 3 count final pin. Probably just for that last burst of smart-assness, Royce circles back and heel stomps Cap in the balls before exiting the building.

So Royce is supposed to be the pretty one, the body beautiful. He’s supposed to be the looker, the headliner. But honestly, all I can think as this brutality comes to an end is how much I just want to rub down Cap’s bruised muscles with baby oil. Don’t get discouraged, Cap. In 10 years, Royce is going to have a bear belly and will still be living off adolescent glory of beating up the AV nerds behind the bleachers. And if my prayers to the homoerotic gods are answered, you, Cap, will have been eating right, lifting weights, and expanding your arsenal to drag Royce’s hot ass kicking and screaming back into the ring for an epic revenge of the nerds, homoerotic wrestling style.

4 thoughts on “Revenge of the Nerds”