I’m two months behind in anointing a HWOTM, so today let me turn the time machine back to May of this year. There were some sensationally hot releases in May, many of which grabbed my attention, turned me on, and got me off repeatedly. As is so often the case, there were several past HWOTM winners, and I heaped adoration on several releases in fawning reviews. It’s a close call this time around, but my cock tells me there’s just one hunk who finally earned the title…. 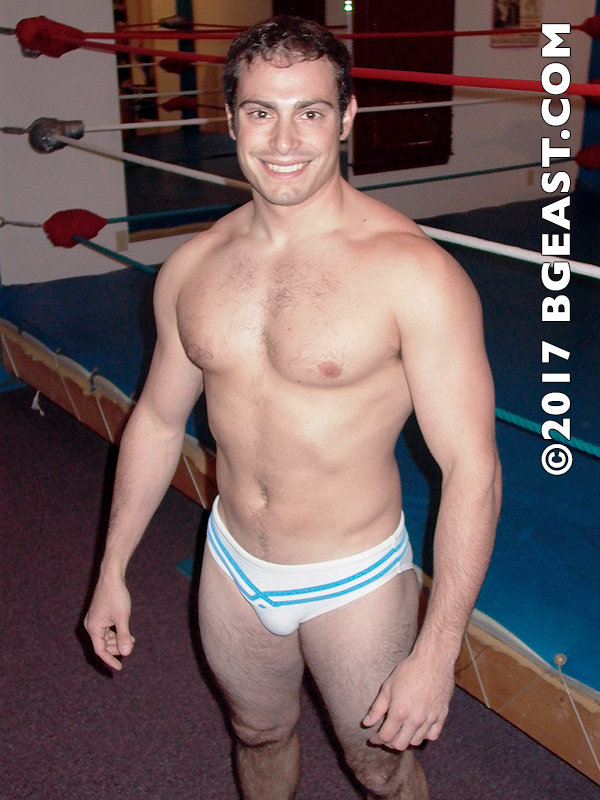 Denny’s performance in Jobberpaloozer 14 elevates him to the rarified status of a 3-time HOWTM winner. If anything, it actually catches me by surprise that this is only Denny’sthird title, because I key off on everything that Denny is in, anytime I get the opportunity. As I’ve mentioned before, there’s something magnetically real about Denny. There’s an authenticity about him that makes me believe every word out of his mouth, every cry of pain, every superhuman feat of strength and dexterity. Continuing a recent theme I touched upon concerning the limits of what a 6-pack will get you, I’m infatuated with Denny’s proportions. He’s got thick, powerful thighs capped off with a sensational bubble butt that I’d love to ride for days. His lush, meaty pecs and rock hard, wide shoulders make me believe every whimper he squeezes out of an opponent with a bearhug. His face is a tad too pretty to be believed; those eyes, that chin, and his babyface smile could easily charm me out of my pants, my bank account, and any shred of dignity. But fuck, I so love that sexy, understated, pillow-top gut of his. Of all the erotic fantasies Denny can inspire in me in still frame, my favorite ends with his sensational, lily white gut and juicy pecs covered in a liberal coat of our cum.

Being insanely pretty is almost never sufficient to get a hot hunk to the front of the line for the HWOTM honors, though. In Denny’s case, his work in Jobberpalozzer 14 epitomizes what makes him such a prominent fixture in the pantheon of my favorites. That “everyman” vibe he exudes with nothing more than his beautiful body stripped to trunks and boots is perfectly accentuated by his superlative babyface persona. He’s more than just eager and earnest. He comes across as a legitimate competitor before an opponent even steps foot into the ring. His prematch warm-ups show off the flexibility, strength, and speed of an honest-as-fuck competitive wrestler. That no-hands, neck stretching, super high arching backbend in the middle of the ring is a work of erotic art all on its own, and conveys a preparation for competitive wrestling that instantly far outclasses the likes of Naughty Nick Naughton as soon as the waves hit the jersey shore.  Nick is all about the glitz and misdirection of the magical arts of pro wrestling. Denny comes across as real as fuck, someone who rips an average joe apart like barbecued chicken. Nick just smirks and struts and rolls his eyes to sell his role as the dirty, no good, cheating heel. Denny stretches and lunges and balances on the head of a pin in a way that sells me every last ounce of believing that he’s been competitively wrestling for years.

Context plays a little role in my choice of Denny as HWOTM, I have to admit. Jobberpaloozer matches don’t often hit my sweet spot, because squashes aren’t nearly as evocative for me as competitive matches. I’m still chewing on the final match in Jobberpaloozer 14, trying to decide how to review it without dripping too much contempt all over that Howdy-Doody chump ass waste of space hollow man pretty boy Luke Lonza that SP is so infatuated with (unsurprisingly). The jobbers in these collections typically put up jack shit, and the best we can say is that they suck down mountains of humiliating suffering admirably (except for Luke Lonza, who cries and whines and bitches and gives up at a rate of about 20 times per minute). However, Denny is absolutely no pushover. Even with his abysmal ring record, I’d go so far as to say he’s arguably nobody’s jobber. So when he opens up some whoop ass all over Nick Naughton in early days, it’s a delightful surprise.  When he battles back from deficits again, and again, to actually school the jersey shore smart ass, it’s actually a little shocking. Sure, I know how Jobberpaloozer matches go, and STILL Denny has me half believing well over halfway through the match that he could very well heap so much class and skill all over the overly tanned manboy in front of him to actually beat Nick like his naughty ass so overabundantly deserves.

In this David vs. Goliath battle, of course, David gets finally upended and then beaten into a withered, impotent pool of sweat and tears. This match squeaks into the Jobberpaloozer end of the pool mostly thanks to the gut wrenching suffering that Denny sells better than I’ve ever seen him sell. Nick dashes his dreams and then stomps them into grape juice. Denny really does suck down gallons of anguish, defying the illusory promise of any quick submission to end his suffering (hey, Luke, fucking take notes!).  Denny sells this so outstandingly that he makes it all about him, even as big Nick is flexing and strutting overtop of Denny’s limp, crumpled, soaked body broken before him. I feel an overwhelming compulsion to rush into the ring, scrape the pieces of Denny off the mat, nurse his wounds and soothe his trounced ego. Knowing my tastes, it’s a little surprising how sensationally turned on and compelled I am by Denny’s epic destruction. So, I know he’s this month’s champ, because he takes me places I was not expecting to go.

If Denny ever needs someone to massage out the soreness, to kiss it and make it feel better, and to worship every inch of his boy next door body, I pray to the homoerotic wrestling gods he looks me up.  In the meantime, Kid Karisma and Eli Black need to scooch their magnificent asses over to make room on the 3-peat throne for my May 2017 homoerotic wrestler of the month, Denny Cartier.