I’ve said it before, and I’ll say it again: numbers are sexy. Take the numbers 19, 26, 7 and 3. That’s the number of inches around Joey Nux-Justice’s upper arms, inches around his upper legs, times Joey bashes Ronnie’s back into a turnbuckle, and times I’ve gotten off on watching Joey and Ronnie pound it out in the ring for Wrestler4Hire.

Of course, when I say “pound it out,” I’m referring to Joey tenderizing Ronnie like a stubborn cut of beef.  “You think you have the perfect body,” Ronnie muses, arriving to find Joey measuring his bulges and shoving them in our faces. “Well, I think I’m the perfect wrestler,” Ronnie explains. “So how about we wrestle and figure out who’s perfect?” It’s a classic narcissist bodybuilder meets savvy pro heel scenario, with a sensational twist, namely that the bodybuilder beats the living fuck out of the veteran pro wrestler.

Both Joey and Ronnie get a little ire from me. One of my pet peeves is a wrestler chewing gum in a match, so I’m hating on Ronnie the moment he steps into the ring and starts gnawing on the wad in his mouth. It’s too casual. It feels disrespectful to the audience. It makes me want to see his opponent slap him so hard his gum flies out, then pick up up, shove it down the front of his trunks, and force the gum back down Ronnie’s throat on the tip of his cock. As far as I’m concerned, a wrestler chewing gum in the ring needs to suffer that much more bitterly for the faux pas.

On the other hand, there’s Joey, who persistently digs his wedgied trunks out from between his muscled ass cheeks throughout the match. This is less a matter of respect than it is just a stubborn refusal to satisfy an audience that wants to appreciate every nook and crevice of his gorgeous physique. I typically root against a wrestler, particularly a gorgeous specimen like Joey, who keeps stretching his trunks to cover up his cheeks.

So I suppose I start the match a little ambivalent about who I want to get thrashed more. But that question is quickly resolved as Joey assertively grabs Ronnie by the wrist and flings his back crashing into a turnbuckle. Perhaps if Ronnie hadn’t been caught flat footed from the start, this would have been a more competitive match. I know for a fact Ronnie’s got more moves than MJ, and 9 days out of 10 he’s a devastating ring tactician. But Joey injures him early, and then often, and unlike 9 out of 10 rookies, Joey doesn’t relent for a second until Ronnie is screaming like a bitch and writhing at his feet.

It’s mostly about breaking Ronnie’s back. The Irish whips corner to corner make Ronnie’s knees buckle out from under neath him. The body slams over and over and over again reduce the handsome pro to a quivering, screaming, drooling puddle. Bearhugs, torture racks, a camel clutch and Boston crab all concentrate every overpowering muscle on Joey on the task of fucking up Ronnie’s spine. The only thing missing, and don’t think I didn’t notice, is an OTK backbreaker to show off Ronnie’s hot, packed bulge.

“Are you sure you wanna wrestle?” Joey asks, mostly rhetorically. He doesn’t really wait for an answer, even if he expected one. He’s come such a long way since his debut MDW match in which he tearfully confessed that “I don’t really wrestle, man.” He’s no Ronnie Pearl, but fuck, he does a sensational impression of an assertive, aggressive, confident muscle pro with something to prove. “You have something to say to me,” he demands, holding Ronnie by a fistful of hair and shouting in his whimpering face.

The match feels like a solid intent to put Joey over. It’s all about Joey. It’s about his gorgeous muscles and power. It’s about his shocking dismantling of a seasoned pro. It’s about his cocky swagger and deafening gun show. If anything, Ronnie oversells his suffering, which is not nearly the mortal sin that underselling is. Either way, Ronnie gets reduced to impotence by a gorgeous hunk of a man bigger and, as it turns out, badder than he is. Joey never needs to plead, humiliatingly, “I don’t really wrestle, man,” anymore, which feels like the story arc of this match. 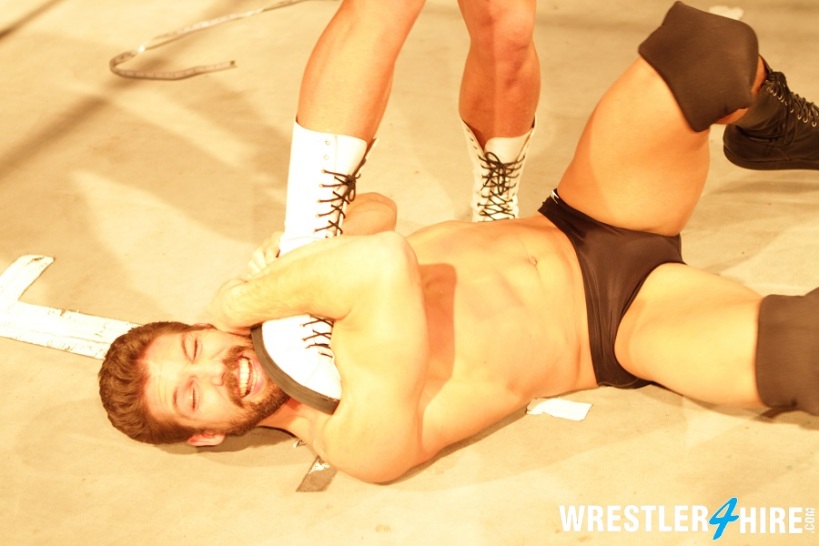 But as for me, I’m mostly infatuated with watching Ronnie. I’ve been entranced by him for years, since I first saw him climb into the ring with his long mane of curly locks, his smoking  hot body, and an obvious feeling of being right at home in a pro wrestling ring. He has decidedly improved from that stellar starting point with age and experience. He has the best head of hair in wrestling, as far as I’m concerned (maybe that’ll be a year-end award for 2018). I’m skeptical of most beards on wrestlers, but there’s a classic Steve Reeves-does-Hercules look about Ronnie that makes me crush on him even more. His muscles are certainly not as huge as Joey’s. He’s not a competitive bodybuilder. But line Joey and Ronnie up and let me have 57 minutes to do what I want with their naked bodies, and no shit, I’m giving even stunning Joey a hard pass to get my hands on Ronnie.

Ronnie’s absolute obliteration at the hands of the muscle-newbie shows off his smooth, gorgeously proportioned body from every angle. He twists and writhes, flexes and stretches, until the camera has treated us to a detailed inspection of pretty much everything one can see with Ronnie’s trunks still on his body. His ass, in particular, makes me push rewind often. There’s something effortlessly sexy and infinitely fuckable about his black clad ass cheeks that incite intrusive images of me pounding him doggie style, my hips wet-slapping into his beautiful butt.

The longer I enjoy homoerotic wrestling, the more I realize how much I enjoy these comeuppance moments when a terrifyingly destructive heel gets shocked, awed, and owned. The humiliation is that much more poignant. His screams and begging and sobs make my crotch twitch that much more persistently. “You have something to say to me,” Joey asks, getting up in the heel’s agony-twisted face. “You said you wanted to wrestle, right,” he taunts the crushed and helpless hottie, driving home the powerful plot point that a devastating pro heel is getting his fuckable ass handed to him because 1) it turns out overpowering muscles can be pretty useful, even on a ring rookie, and 2) gay wrestling fans like me want to see an invincible, straight-laced, handsome hunk like Ronnie witness his body and his illusions shatter before him.

In the end, even my skeptical self has to admit that Joey could actually be a player on the scene. He’s got some moves that a decently equipped opponent can sell solidly. He’s obviously got the pin-up boy angle entirely covered. Bring on more Joey.

But as for Ronnie Pearl, please, oh please, keep me guessing. My infatuation with him is only enhanced by the possibility that he could, on a given day, get the shit kicked out of him and get his gorgeous body pried apart and laid out like a Thanksgiving turkey. Or he could dazzle and destroy like a cruise missile. I love the suspense almost as much as I adore his quivering ass cheeks.

4 thoughts on “Striving for Perfection”