Is it just my imagination, or does gorgeous hottie Zach Reno deliver more than his fair share of trunk pulls? 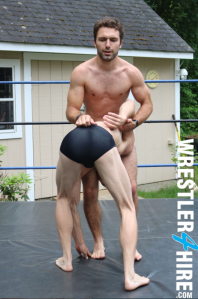 Zach is so determined to weasel out of doing his chores that he stuff’s Jayden Mayne’s handsome face between his hairy thighs, leans forward, and gives the choreboy’s trunks a quick tug.

Zach does what it takes to level the playing field when he’s double-teamed by gargantuan muscle gods Mark Muscle and Zach Altovito, including, but not limited to, yanking hard on Mark Muscle’s trunks to make his earlier low blows linger longer.

It’s not like Zach turns to the trunk pull only when the odds are long. He and fellow lightweight Ethan Andrews are more than enough to take on big, beautiful, pro loudmouth Garrett Thomas, but a completely gratuitous trunk pull makes Zach’s gut punches on the trussed up hunk that much more painful. And humiliating. 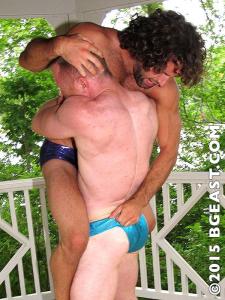 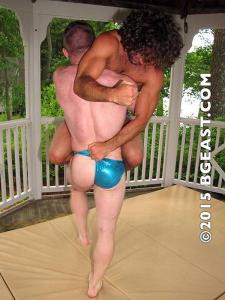 The defensive trunk pull “works” only in so far as the wrestler on offense instinctively reacts to having his gear wedged up his ass crack and his cheeks exposed on camera. Zach’s pull implies that he’s an innovator, that he’s calculating more than just wrestling skill and strength, but also ego, vanity, and focus. Lesser men might be shocked and distracted to be on the receiving end of a defensive yank like this. Unfortunately for Zach, Kid Karisma is “less than” no one, particularly when it comes to showing off his multi-award winning ass.

Not only is Kid K unfazed by Zach’s move to expose his perfectly muscled ass cheek, he happily demonstrates that one good yank deserves another. Ever the fan-pleaser, Kid Karisma makes sure you and I can make a fair comparison to determine who wears the wedgie best.

Personally, my fan support for Zach Reno is only accentuated by his readiness to grab hold of his opponents’ trunks. I seriously love Zach’s hot, compact body and his take-no-prisoners wrestling style. I’m a huge fan of his furry, muscled ass, as well. Like his ultimate fate in his match with Kid Karisma, he may not be ready to compete with the sheer beauty of Kid K’s breathtaking bare butt, but I’m loving Zach’s willingness to go there!