—-continued from The News Division Match 5—- 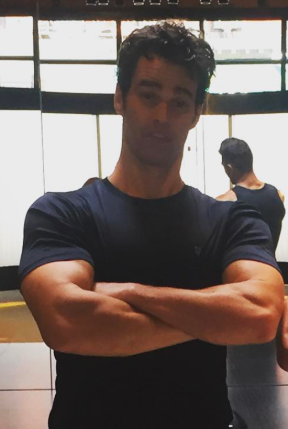 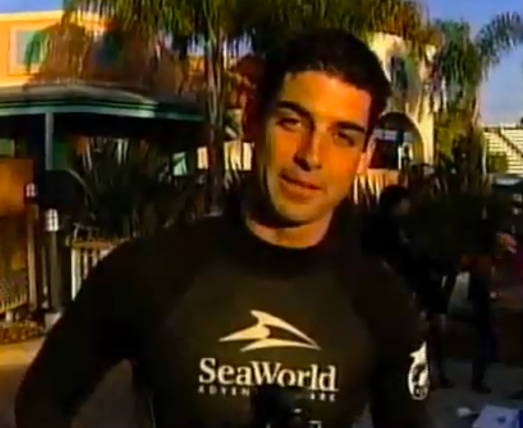 As soon as Chris had defeated Thomas, Rob ran out to help his humiliated colleague off the beach.  As Rob reached the scene of the victory, he looked warily at Chris, still flushed with rage and adrenaline. Chris nodded at Rob, and the two of them knelt down and hooked their arms underneath Thomas’ arms, still dazed and unable to stand on his own power. They lifted him off the sand and turned to walk him back to the landing at the bottom of the stairs. Just at that moment, Carter reached Rob at a full sprint. Driving his shoulder into Rob’s gut, Carter lifted him off his feet and drove him five feet backward.   Diving on top of Rob’s falling body, Carter speared him with his shoulder as their bodies hit the sand.

Chris dragged Thomas toward the stairs, finally receiving help from Richard and Sam who helped carry the stunned hunk off the beach.

Rob gagged and choked for a moment, unable to catch his breath. Carter dropped a series of knees into Rob’s abdomen, pounding his full weight over and over again into the dazed hunk’s gut. Finally relenting, he allowed Rob to roll away onto his side, curled up, clutching his abdomen. Carter quickly peeled his own yellow speedos down his legs. His sun drenched skin sported no tan-lines, as the viewing public at home had enjoyed watching him sunbathe in the nude for the past week. Carter breathed deeply, steeling himself for the fight. His cock was thick and just beginning to swell, his crotch shaved smooth. He didn’t wait long to press the advantage on his much larger opponent.

Carter began driving his knee into Rob’s lower back. Rob arched his back, shrinking from the strikes. As the stunned stud tried to roll away, Carter stomped his right heel into the small of Rob’s back, then leaned down and grabbed hold of each of Rob’s wrists. Pulling back sharply, he stretched Rob in a stunning surfboard.  With his arms stretched straight behind him, Rob’s round shoulders and thick biceps stretched as far as they could go.  Rob moaned in agony. Confident of his control, Carter stepped his left foot onto Rob’s back, next to his right foot.  Balancing himself and leaning backward, the expert surfer rode his opponent like a wave.

Rob twisted his body instinctively, and Carter rolled off to the side, losing his grip on Rob’s wrists. Rob crawled up to his hands and knees, shaking his head to clear the cobwebs. Carter crept up behind him. In a flash, he grabbed the top of Rob’s red trunks and yanked them down, exposing his pale ass.  Rob grabbed at the front of his trunks with his right hand reflexively, falling to his stomach on the sand to avoid being stripped. Carter tried to pry the speedos backward, stretching them far beyond their limit. Rob continued to hang on to the front of his trunks, refusing to let go.

Carter gave up on the trunks for the moment. Squatting, straddling Rob’s upper back, Carter hoisted Rob’s arms up and hooked them over his knees. Lacing his fingers under the trapped hunk’s chin, Carter leaned backward, securing a Boston crab. Rob sucked down deep, controlled breaths, enduring the grinding pain twisting his spine. Carter shook his arms up and down, but Rob just grunted, sucking down the punishment.  Finally, Carter released Rob’s head and dropped his upper body to the sand in frustration.

Again, Rob crawled slowly to his hands and knees, as Carter circled him, trying to decide how to attack the big man. Carter planted his left foot and swung his right foot, in preparation for kicking his opponent in the side of the head. But before Carter could connect, Rob dropped to his stomach and pulled Carter’s left foot out from underneath him. Carter landed hard on his upper back and shoulders, stunned.

Rob rolled sideways and quickly crawled to his feet.  He tried to pull his trunks back up to his waist, but found that the seams were in shreds.  Reluctantly, he dropped the red trunks to the sand and stepped out of them.  Rob’s thick curly hair around his cock was covered in sand, and his cock bounced, semi-erect, as he crouched defensively.  If anyone was going to get the bonus for taking his trunks off, it was going to be him.

Carter swiftly rolled over and hopped up to a crouching position, his hands held up in front of him.  Seeing Rob step out of his speedo, Carter leered, “Now that’s what I’m talking about.”

Both men circled one another warily in the sand. Rob finally charged forward up high and wrapped a thickly muscled arm around Carter’s head.  Holding Carter in a tight headlock against his side, Rob squeezed with all his strength.  Carter wrapped his arms around Rob’s waist and, thrusting with his powerful legs, he lifted Rob off his feet.  Falling backward, Carter dropped Rob on his shoulders and neck. Rob released his headlock, stunned.

As Rob lay stunned on his back, Carter grabbed Rob’s head by the hair and slid it between this thighs, face-to-naked-crotch. Lacing his ankles together, Carter squeezed Rob’s head between his thighs. Rob frantically tried to pry Carter’s legs apart, but the surfer’s quads were far too strong.  Grabbing a handful of Rob’s hair, Carter pulled Rob’s face upward against his balls, flexing his powerful thighs painfully around Rob’s head.  Carter pressed his eyes closed and leaned backward, his cock swelling with excitement.  “Mmmmm,” Carter groaned.  “How’s that for you, Rob?”

Rob pressed his shoulders forward beneath Carter’s upper legs, lifting Carter’s legs and folding him over, pinning him onto his back.  With his face still trapped in Carter’s crotch, he leaned his full bodyweight down on top of his opponent.  Carter squeezed his legs harder, his body piked beneath his surging opponent. Stretching his arms around Carter’s thighs, Rob managed to lace his fingers behind Carter’s neck. With a sudden burst of strength, he muscled his feet underneath him, then power-squatted up, his head still trapped, pulling Carter’s body off the sand. Arching his back, Rob lifted Carter high into the air, then drove him down, pounding Carter’s back into the sand. Carter flinched with pain, and he lost hold of Rob’s head.

Rob stumbled backward, his chest and abdomen heaving with gasping breaths. He was quickly tiring. Carter remained on his back, catching his breath with a wary eye on his opponent, his feet lifted defensively between them. Carter shifted his weight, pulling himself up on his elbows. At that moment, Rob lunged forward to mount his opponent before he had a chance to get to his feet. As Rob dove downward, trying to position his legs to the outside of Carter’s legs, Carter kicked his heel straight upward, catching Rob solidly on the jaw.  Rob’s teeth popped together, as pain lanced through his face.  He dropped awkwardly to his knees, dizzied by the blow.

Carter twisted his body, swinging his right heel around to crash into the left side of Rob’s face. Rob was flung to his side onto the sand, clutching at his jaw. Carter rapidly hopped to his feet in a low crouch, assessing his opponent. Rob’s breathing was labored, and he was covered in sweat and sand. Moaning in pain, Rob was oblivious to his opponent’s approach.

Carter dropped to his side, entwining his legs around Rob’s left leg while spreading Rob’s right leg in the opposite direction with his upper body and arms.  Carter stretched his body straight, prying Rob’s thick, lightly hairy legs apart.  Rob screamed in pain, feeling his crotch ripping.  His lower abdomen and hamstrings quivered, as his cock grew harder. Carter gently rubbed his hand from Rob’s right knee down his inner thigh, approaching Rob’s crotch. Rob screamed in fury, “Keep your hands off my cock!”

Carter laughed, prying Rob’s legs farther apart. The trapped hunk screamed again. He tried to pull his back off of the sand and reach for Carter’s face, but the pain, and Carter’s hold, kept him immobilized on his back. Carter shouted, “I think it’s about time you submitted!” Rob shook his head “no,” biting his lower lip.  Carter then pounded the knuckle of his right index finger into Rob’s quivering, taut hamstring.  The assaulted leg began to shake violently, as he screamed again. Finally, Rob gasped, held his breath for a moment, then screamed, “I give!!!”

Carter pounded his knuckle into Rob’s leg a few more times, then rubbed his hand up and down Rob’s upper thigh.  Rob groaned desperately, pleadingly, “Keep away from my cock!”

Carter released Rob’s legs and crawled to his hands and knees. Crawling over top of Rob’s prone body, Carter hung his head low, just inches away from Rob’s face, still contorted in pain.  Carter whispered contemptuously, “Get over yourself.  I have no interest in your cock, bitch.”  Then Carter turned around over top and sat his ass across Rob’s chin.  Smiling up toward the cliff, Carter flexed a double-bicep, his darkly tanned, naked body covered with sand, glistening with sweat in the afternoon sun.

After the victory ride, Carter walked away from Rob without looking back.