Skip to content
November 3, 2009July 1, 2013 wrestlebard
Okay, I promise. This will be my last politically-minded post for a while. Today, millions of people are casting ballots about “gay marriage,” legal protections for same-sex couples, and candidates whose campaigns are built at least in part on fear of “the Gays.” In times like this, it can be hard to stay centered. It can be difficult to know how to feel when you’re part of a small minority of the population being evaluated for the extent of your citizenship by the faceless majority. I suppose we could pray for a good outcome. We could wait on the edge of our seats as the returns start to roll in this evening. Or perhaps we could take a different approach: 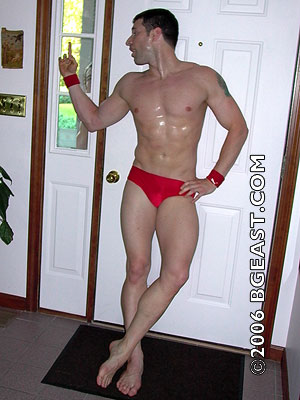 BG East boy Brad Rochelle* has the right idea, I think. When the political storms are brewing, the best thing to do is look gorgeous and flip the bird.

Gerard Butler is a quickly rising stock in my lust-portfolio, in no small part due to the dozens of pics available displaying the Scotsman’s rational, reasonable response to annoying people who would strive to make him into an object and a commodity. We should take a lesson from Gerard’s response to the paparazzi, and salute “the electorate” accordingly.

Seriously, I have no clue who this guy is. TMZ tells us that he is (was, wants to be?) Miley Cyrus boyfriend. Whatever. He’s got sweetly rippled abs, a mouth poised for penetration, and exactly the attitude I’m feeling about election day 2009.
Frankly, though, I’m not sure these guys capture quite the sentiment that I’m trying to put my finger on here. The middle finger salute is on the right track, but it’s lacking the volume that I think is commensurate with the dehumanizing role that ballots play in offering the faceless majority the opportunity to screw over the Gays.

There we go. Brooklyn Bodywrecker is communicating the sentiment clearly. A double bird, the word “fuck” clearly forming across his lips, and his balls resting across the chin of some obliterated punk (let’s call him “Doug“)… that captures both the content and the volume of the only appropriate response to election day 2009.

And though Trevor Adams doesn’t appear particularly fierce in this fantastic performance art piece, I’d like to end with him and his shiny chest. Trevor looks ridiculous and ironically uninvested as he lets fly a pair of birds. Perhaps that’s the most constructive place to be in today. Looking gorgeous and oiled up, in a g-string, dancing, pointing a double-barreled “fuck you” at the world and yet not really caring so much.

*I don’t know the actual political opinions or ideological leanings of any of these guys. I do know, however, that they’re gorgeous and make me smile.