When I was a teenager, I remember Tommy Zenk coming through the local wrestling operation for a year or two. He was a knight in shining armor. Tommy was over-the-top good guy, rule follower, gracious interview, full of gratitude for his screaming fans desperate to worship him. I saw his confident, innocent smile. Then I saw those freaktastic huge shoulders. Then I saw that broad, sexy chest and the skinny waist. Then I saw his incredibly muscular ass squeezed into those brief trunks, and then… boiing!… I was gay.

I saw him in various incarnations across his career (Tom Zenk, the Z-Man, half of Can-Am Connection). But seared in my personal development as a gay man with a wrestling kink is that early chapter in his career when he blew into town and was unstoppable. In a daring storyline, Tommy was the boyscout face who tore through the bad guys like a buzz saw. He was undefeated week after week as the girls screamed near hysteria when he climbed on top of man after man, pinning them to their backs. When this sweaty, heavily muscled man pumped his fist in the air victoriously, I was ready to pop.

I’m certain that the first moment I noticed a pro-wrestler with shaved armpits was in the middle of lustfully worshipping Tommy as the ref lifted his arm in victory. I certainly don’t mind hairy pits, but for a while there, I wanted nothing but smooth skin stretched across bulging muscles, a la Tommy. 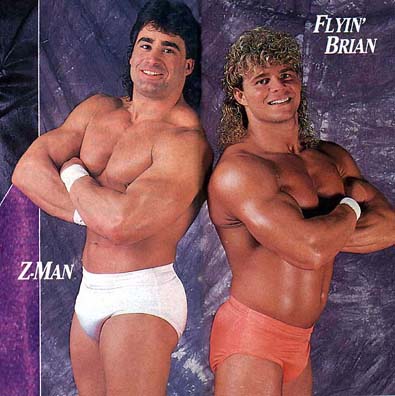 My favorite Tommy match came much later, but it remains a cherished memory. After Flyin’ Brian Pillman finally cracked under the pressure of trying to uphold his end of the saccharine sweet tag team with the Z-Man, he turned heel. Tommy and Brian developed a brutal rivalry. When they met in the ring, it was a tit-for-tat show. The storyline, though, argued that Tommy was the superior wrestler, while Pillman held his own with his new found guile and rule-breaking. The match ended with a draw when the clock ran out, but the boys kept battling as the screen faded to commercial.

Wiki tells us that Tommy is now working for a hedge fund (seriously? people still do that?). Flyin’ Brian has long since died tragically, as have so many pro-wrestler who made me the gay wrestling fetishist I am today. In my memory and imagination, though, they all continue to do battle, strutting and flexing and slamming and squeezing, reminding me why it is two hardbodies in trunks make me so happy to be gay.