It’s like the keen eyes at Towleroad were thinking of me (and you) when they posted this YouTube gem. I don’t speak Spanish, so one of you will have to correct any misconceptions I have about the clip, but from the title and the drama, it appears to me that a Mexican bodybuilder is majorly pissed off with is placing at the end of the day. It looks like he’s disgusted with his, what, second place prize? He rips it up, walks up to the end of the stage and calls out the judges. One hot piece of judge-beef in a polo shirt stands up and invites the sore loser to bring it on.

So Baby Blue leaps from the stage and tackles the hot piece of ass judge. The crowd scatters. Satellite fights break out. Another competitor shows up, pounding a metal chair on the announcer’s table. That’s where the clip ends, but damn… my imagination is just getting started! 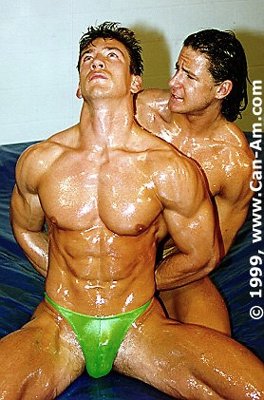 The bodybuilding competition as the backdrop to a wrestling match was already dreamed up before Baby Blue ever oiled up those humungous pecs of his. Can-Am was playing up the bodybuilder angle explicitly early on, including Kick-Ass Bodybuilder Feud 1 (it’s a bitter tragedy that Roman Stone didn’t have a longer tenure in homoerotic wrestling). Kick-Ass Bodybuilder Fued 2 doesn’t count, because Billy Vochek can’t pull off the role of bodybuilder. Enough said.

But actually what I was thinking of was Zeus productions Punishment 4, which features the relevant storyline of musclegod extraordinaire, Steve Sterling, getting abducted the night before a bodybuilding competition by Ivan Malek and pro-salesman of the decade, Cliff Conlin. Ivan and Cliff are charged with beating the crap out of Steve in order to spoil him for the bodybeautiful competition the next day. 2-on-1… 1-on-2… in the pro-ring… lots of muscle getting tied up and humiliated in the ropes. Whew! I need turn a fan on… 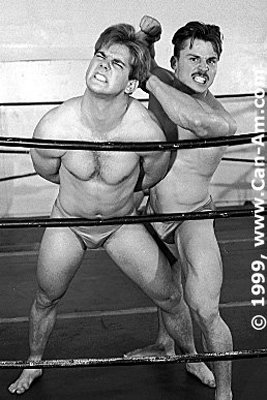 So I’m all for someone producing the next chapter in the YouTube story, when Baby Blue takes his oiled pecs to the gym the next morning and finds Poloshirt Hunk waiting for him behind a corner. The action simply must find its way into the ring. Baby Blue’s nipples absolutely must be tortured as he squirms, all trussed up in the ropes. The tables must turn… at least twice… and one of these two boys’ muscle-asses needs to get ridden hard in order to determine once and for all which one of them knows quality muscle when he sees it. 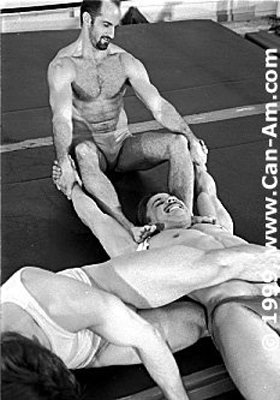