Skip to content
August 25, 2010July 1, 2013 wrestlebard
I don’t mind watching hot guys who can’t wrestle… sometimes. Every so often it can just be about gorgeous guys, minimal gear, and going through the motions of what wrestling sort of looks like. I don’t have to believe it. I’ve got an active imagination, and I can suspend disbelief as necessary for the sake of entertainment. But it’s a treasure when I come across a match that meets me more than halfway. When the boys sell me without me having to squint my eyes and pretend I didn’t see all those pulled punches, I’m a very happy camper indeed.

At face value, Submission 8 makes me skeptical. The boys involved aren’t in the upper echelons of my favorite homoerotic wrestling rankings. Jonny Firestorm is in his beefy, hairy incarnation, and though I’m not nearly as fanatical about it as some of the commentators at the BGE discussion group, I tend to get more of a kick out of Jonny tighter and trimmer. This is my first chance to see Skip Vance in action. He possesses such a boyish look about him that it almost puts me off. His level of fitness is astonishing and speaks to more maturity than shows on his face. And there’s something about his tanlineless ass that’s a bit captivating. But frankly, I tend to objectify wrestlers with more size and a little more mature look about them.

Thirty seconds into the match, I don’t care about any of that crap at all. Skip fesses up that he’s “all about the looks,” and it’s all down hill for him from that point forward. Jonny has fantastic skills. He focuses on the task at hand, and he takes the opportunity to illustrate, using Skip as his helpless sparring dummy, a catalog of holds and maneuvers he’s mastered.
Frankly, even all that sort of fades into the background as this match progresses. What’s absolutely fascinating about this match is that I totally believe that Skip is on the receiving end of a boatload of hurtin’. This works for many reasons, of course. Jonny has the skill and self-confidence to twist, toss, pry and pummel Skip to the very edge of physical tolerances. Jonny obviously understands how far joints can be pulled before they pop… how much tension bones can carry before they snap… how far he can push an über-flexible dancerboy like Skip before he’s done actual, acute damage.

This also works because Skip suffers so sweetly. He’s getting bullied and beaten senseless, and he shows it. Early on, when he still has some shred of dignity left (he’s only submitted three of four times at this point), he gets mad when Jonny refuses to release the hold in which Skip has just gasped out his most recent submission. “All right, all right, all right! I give! Fuck! I said I give!!” he snaps angrily. 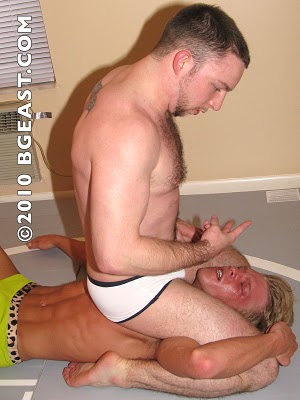 Skip’s bruised ego gives way to a tone of fear in his voice as he’s forced to submit over and over again. Jonny keeps toying with him, sometimes letting him breathe a few seconds before renewing the assault, sometimes not. Skip’s last gasp of indignation comes when Jonny makes him count out his own three-count pin. After that, Skip’s voice starts to sound a little desperate as he begins to get the picture that Jonny is playing by his own rules. Stretched out in a backbreaker with Jonny clawing at his balls, Skip sputters and coughs, his voice rising an octave. “Oh, fuck!” he pleads. “I give! I GIVE!!!”

Pleading turns to sobs and screams. Sometimes Skip frantically tries to bat Jonny away, squirming desperately to stay free for a precious few more seconds of relief. At one point, Skip has his head in his hands, desperately gasping, “I want a break. I need a break. Just give me a couple of minutes. Fuck, I’m hurtin’…” Jonny’s definition of “a break” is clearly different than Skip’s, though.

Sometimes, Skip looks like he’s trying to play possum, just desperately hoping that Jonny will let the torture session come to a close. But Jonny is relentless. Skip’s entire body is shaking with sobs as he cries, “Just stop. Just stop….” Like a true sadist, Jonny only stops when the pretty boy physically can’t cry any longer.

I genuinely feel a little anxious for Young Skip in this match. He’s suffering so convincingly, it manages to tweak both my empathy and my wrestling kink at the same time. I’m torn, wanting Jonny to keep teaching that lesson and wanting him to give the completely outmatched kid a break. In the end, I’m happy to say that I got sucked into the moment. Skip and Jonny meet me more than halfway. I’m provoked at multiple levels, and that’s a whole lot deeper than I typically expect from homoerotic wrestling. Nice work, boys.

7 thoughts on “The Agony and the Ecstasy”