Skip to content
August 31, 2010July 1, 2013 wrestlebard
Trent Diesel’s reign as my homoerotic wrestler of the month is coming to a close. I’m still rooting for more wrestling action from the prime time porn boy, at which point he might make another -of-the-month appearance, or he could seriously make a run in my favorite homoerotic wrestling pornboy rankings. In the mean time, time marches on. New releases this month have been pretty abundant, particularly for the lean months of summer. BG East released the second half of their catalog 83 new releases, including some notable performances by Rio Garza & Reese Wells, Bobby Horton & Tyrell Tomsen, and an impressive 1-on-2 beatdown by Donnie Drake. Naked Kombat put up 4 contenders, including a pretty damn tasty oil match debut for one hard, compact little bundle of hot muscle, Sami Damo. I’m too confused to track the timing of Can-Am’s to-disc releases, so I’m just going to count their Max subscription releases as new to me, since that’s where I’m getting most of my Can-Am fix lately. As a result, I’m tossing in the first few scenes from Arena 4, Toy Fights, and Jobe Zander vs. Aryz Quinn Director’s Battle as contenders. If you’re keeping count, Aryx Quinn is in all three of these Can-Am releases, which brings to mind my comments about Rio Garza’s overexposure recently. But in the interest of keeping the peace, I’ll just let it pass. Did I miss any new releases?
Well, without further ado… my pick for reigning homoerotic wrestler of the month is Bobby Horton.

A major factor in my selection of Bobby is how he came completely out of the blue to shock me into awed respect. The last time I caught sight of Bobby, Mitch Colby’s balls were wresting on his chin in Backyard Brawls 5. While I was jealous of that position, I really didn’t take much note of Bobby (my eyes were all over Mitch).

Well, Bobby’s come a long way, baby. Storming the ring against muscleboy Tyrell Tomsen in BG East’s Ring Rookies 3: A Heel is Born, Bobby grabbed hold of my attention with both hands, shook me around a bit, slapped my ass and absolutely made me sit up and take notice.

Bobby emerges as an out-and-out freak in this bout with Tyrell. A screw shook loose somewhere along the way (perhaps in getting manhandled by the drop dead gorgeousness of Mitch), and Bobby is wrestling like he just doesn’t care who he hurts any more. Wait, I take that back… Bobby is wrestling like he cares just a little too much about hurting just about anyone. He’s a little maniacal, a lot sadistic, and he moves like a work of pro-style art. 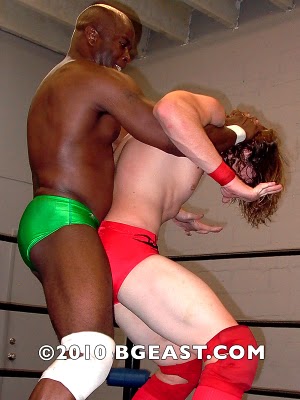 Not to give it all away, but Bobby is the one mentioned in the subtitle of this match. He’s getting some major kicks thwarting the overwhelming power of Tyrell and, in turn, laying some devastating hurt on the big man. He also takes as good as he gives, but it’s the give that really turned me into a Bobby fan this month. Bobby’s in the nonpornboy ranks (so far… I can always dream), but he brings plenty of kink with him to his beatdown on Tyrell. He’s got the moves. He’s got a hot, made-for-pro, rough and tumble body. And now that he’s got a balls-out giant-killer lust to lay down some hurt, I say he’s the total package. Bring on some more Bobby!