Here we go again. A month and a half after BGE releases a Donnie Drake 1 on 2 squash, Can-Am is pre releasing pics from a Donnie Drake 1 on 2 bout.  I think there could be a place for this type of copycat production (see Rio v Jobe and Rio v Aryx for more examples), really I do. I think that Can-Am’s specialty in pornboy porn wrestling could make a hot Rio v Jobe ring battle resurrect into a very nice trunks off, hands on mat tussle that I’d pay double for. Other than the translation to mats, that’s not the formula that Can-Am appears to be applying to their second place finishes.

Still, I am liking the hint that I’m getting from the Can-Am boss’s Twitter pics, though. Donnie’s 1 on 2 battle for Can-Am is a scrap with Chris Bruce and Rio. While true, this is yet another reunion of BG East boys, Sexton has a provocative pic of Donnie double teamed with his face in Chris’ crotch while Rio applies a boston crab to the bad boy. I’m not going to hold my breath to finally, finally, finally see Chris (or either of the others) really sex it up, but I am a fan of some of these straight up homoerotic wrestling boys working a little more of the homoerotic side of the coin with faces to crotch. I still think that a loser-cums scenario (one way or another) would make this seem less like a BGE re-run and more like something I’ve come to appreciate Can-Am for. 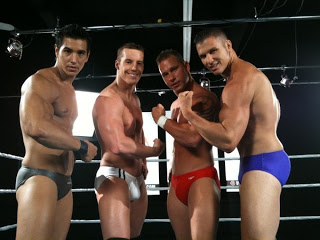 Another sneak peak pic from Sexton shows what appears to be a tag team line up for an in-the-ring match starring still another combination of BG East alums, Aryx & Donnie teaming up against Rio and Cameron Matthews. I tend to prefer ring matches. I like tag teams. Frankly, I’m still taking cold showers waiting for a another seriously hot lovers on lovers tag team match. Something tells me the Aryx/Donnie Rio/Cameron combinations won’t be sparing me another cold shower, though. But otherwise, this is pretty solidly in my wrestling kink niche, and I’m anxious to see it.

I’m going to hammer on my old saw, now, though (note that despite the mixed metaphor, everything stays in the tool shed). You simply can’t tell me that there are only a dozen or so quality performers out there who can sell homoerotic wrestling. I don’t believe it for a second. Now, I don’t begrudge the boys themselves their dues. Someone offering a paycheck isn’t to be taken for granted, particular in the present economic environment. Wrestle for whomever treats you right and gives you checks that clear. But higher up the food chain, I just want to say again, don’t phone it in. Spot the smokin’ hot new talent and blow me away with something I’ve never seen before. Or even take the tried and true golden boys and make them tell me an entirely new story. Keep the homo and the erotic up front, even though I understand that you’re often going to work with straight boys. But one way or another, keep it fresh, make my blood pump faster, and introduce me to a new obsession, a new story, a new spark to make me believe that there’s something more out there to be had that I haven’t already bought and paid for.