Skip to content
December 13, 2010July 1, 2013 wrestlebard
Careful readers will have detected that I’ve been ass-obsessed for quite a while now. Typically, I tend to fixate on eroticized body parts on a rotation scheme. But I’ve been crazy for hard, round glutes over all else lately.

Conventional clothing for men seems to be devoted to promoting the illusion that guys have nothing swinging between their legs. I don’t know if this is an expression of the emasculation of the “civilized” male in an effort to defuse violent competition and promote more complex forms of cooperative community, but the tight, flat front trouser seems the exact opposite of the beautifully aroused phallus encased in bulging wrestling gear. Derek da Silva’s gorgeous tool at full staff in his decimation at the hands of Kid Vicious is a case in point. To try to disguise that slab of beef, to tuck it or camouflage it in the interest of making it appear inconsequential, would be a crime against nature.

We haven’t seen buzz cut boy Joe Driver in a long time, but any conversation about a prominent wrestling cock should mention the image of his stuffed trunks. He was a lean, mean wrestling machine, perhaps a little too lean yet not mean enough for my tastes most days. But that massive bulge was absolutely hypnotizing!

The pic of Joe’s crotch straining at the seams of his trunks as he bridges high with his head trapped between the thighs of Cole Cassidy is simply art. This should be slapped in a gilt frame and set hanging in a museum. It also arouses in me a recurring fantasy of my lover in a wrestling match, trapping, stretching, and exposing his hunky opponent vulnerably and humiliatingly, and me climbing in the ring to capitalize on the capture of my lover’s prey.

Lance Jeffers is another name that I think simply has to be included in any discussion of astounding appearances by cock in a wrestling match. In his case, Lance’s truly astonishing cock probably diverts too much attention away from his impressive wrestling skills. He was an impressive, scrappy, savvy wrestler who deserves to be admired for that… but then there was that monster cock! Watching that python grow in his trunks was like it’s own Mutual of Omaha’s Wild Kingdom episode. Lance’s throbbing, bobbing, incredibly long and beautiful beast was x-rated well before his trunks ever came off. I’ve only seen preview teasers for Wrestleshack 6, but that’s been enough to sear into my memory the incredible image of Shon Tracy punching Lance’s school bus like a heavy bag.

Perhaps the most inspired incorporation of a monster cock in a wrestling match, in my book, was in X-Fights 15 (you’ll have to ask for it by name if you want to order it). DW and Doug Perry face off in one of the most balanced combinations of erotic and wrestling that I’ve ever seen. Doug Perry’s crotch is simply mind-boggling before it ever gets pulled out of his trunks. I confess to having thought, “Surely that can’t be real.” Then DW slips Doug’s meat free of his trunks, and my jaw falls open. “Holy shit… it’s real!” But the most priceless moment is when DW has Doug in an over-the-knee backbreaker, naked and fully erect. Doug’s monster is flopping around as he squirms in pain in this torture hold. And then DW grabs hold of it, strokes and massages it for a while, lulling Doug into stillness. Then shockingly and abruptly, DW pulls upward on Doug’s massive cock at the same time he slips his leg out from underneath of him, slamming Doug to the mat and never losing his grip for an instant on the raging python. It makes me gasp every time I watch it. 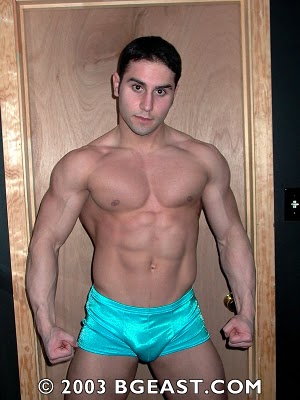 I’m sure there are many more that I’ve unfairly left unmentioned. The pretty boy stretch Armstrong-looking Jordan, for example, seemed like he had to lean backward just a little to compensate for the inordinate weight he was carrying in the front of his trunks. It’s also an iron clad truism that it doesn’t have to be huge to be stunningly beautiful, at least as far as I’m concerned. But at the moment, all credit and obsessive homoerotic wrestling thoughts of mine are heaped upon the boys with ample quantity as well as quality.

2 thoughts on “The School Bus has Landed”