Gerard Butler was quoted recently complaining about the excessive attention that changes is his fitness and physique garner from his critics and gossips. Rather than jump all over his percentage body fat he’s carrying at any one time, he’d prefer that everyone appreciate the level of dedication he embodies by crafting his physique to fit the demands of his roles.  Need to look like a Spartan king in a homoerotic flesh fest? Gerard’s commitment to his craft is up to that challenge.

So we should all stop focusing on his physique?… yeah. Right.

Actually, I don’t think that I really fall under either the category “critic” or “gossip.” My infatuations with Gerard are entirely in the realm of my homoerotic imagination. And I appreciate pretty much every incarnation I’ve seen of the hunky Scotsman. Lean and ripped, thick and powerful, smooth, hairy… Gerard’s body never fails to inspire homoerotic wrestling fantasies in my highly reactive imagination.

I first pictured Gerard as taking umbrage at the unflattering lampoon of his 300 performance by English funnyman and smoking hot hunk, Sean Maguire. In a focus group grudge match, Gerard set out to teach the satirical Englishman a lesson in humiliation. Things don’t turn out quite the way Gerard intends, however, but the Scotsman isn’t exactly too unhappy with finding himself tamed and brought to heel by his new master and commander’s mouth.

Gerard showed up again in my homoerotic wrestling imagination in a tag team ring bout at the side of Sean. With bear daddy Sean calling the shots, Gerard’s fortunes are much brighter as the two of them incapacitate Jonathan Rhys Meyers and capture and claim Henry Cavill into their pack. It’s Gerard’s big, powerful body that inspired much of the action in that match, along with the provocative pairing of smaller Sean in complete control of the Scotsman’s psyche and libido. 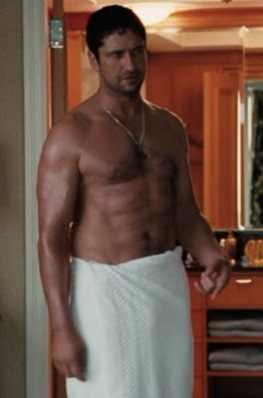 And yet again, Gerard showed up for a third time in my homoerotic wrestling imagination, this time teamed with his cub-pet Henry to take on True Blood muscle gods Joe Manganiello and Mehcad Brooks. It doesn’t hurt to have bear daddy Sean at ringside, but that should take nothing away from the impressive performances that Gerard and Henry deliver to conquer and celebrate. 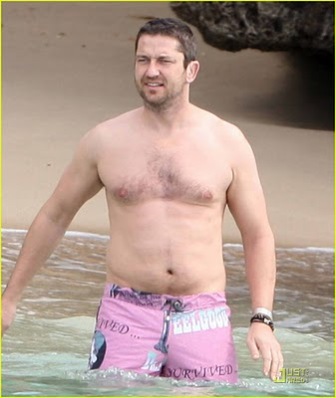 No doubt, I prefer my homoerotic wrestling fantasies to star Gerard closer to the 300 end of his fitness spectrum, but a nasty bruiser with a hot belly can tweak me hard as well. A big and beefy version of Gerard in pink trunks schoolboy pinning some awestruck gym bunny is a hot, hot scenario to imagine. 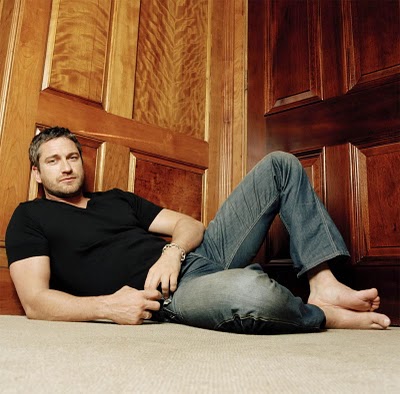 So I strongly suspect that I will continue to pay excessive, dare I say obsessive, attention on every curve and crevice of Gerard’s body, whether he wishes it or not. And let’s face it, a barrel chested Scotsman who’s made a mint and a half on peeling off all of his clothes for his naked image to be projected onto a 70 foot high movie screen can’t really complain too vociferously about anyone paying a lot of attention to his physique. Now, any catty bastards that want to talk trash about him for occasionally insulating his sexy six pack need to pipe down. Anyone, and I mean anyone who discourages a fine, burly hunk like this from stripping should be soundly boxed about the ears and ball-gagged.  And that scenario very well could inspire a 4th appearance for Gerard in my homoerotic wrestling fantasies!