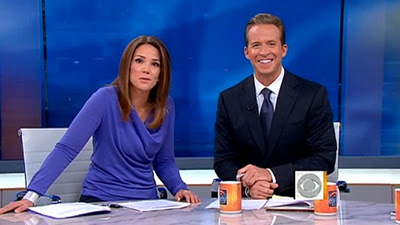 It’s been ages since I posted about the only reason I have any idea what’s happening in the world around me: hunky morning newsmen. I’ve migrated almost entirely to The Early Show on CBS, having felt crushed and pissed on (not in the good way… if you’re into that…) by ABC’s epic failure to retain Italian stallion and star of many a fantasy of mine, Chris Cuomo. As sexy as I think George Stephanopoulos is (and I do), I just can’t help but feel bitter resentment any time I see his face behind the anchor desk that, by all that is holy and just, should have been Cuomo’s. CBS has partially filled the void in my morning lusts by assembling a team of hunks that collectively get my juices pumping almost as feverishly as Cuomo does anytime he goes fishing.
It takes four CBS news studs to approximate the raw sex appeal of a certain curly haired Italian, but I’m not disappointed by the assembled beef and beauty (in descending order of my lustful affections): anchorman Chris Wragge, news reader Jeff Glor, correspondent Whit Johnson, and correspondent Ben Tracy. Sure, Cuomo could crush any one of these studs in a marathon bearhug until the lucky bastard wilted in the Italian’s pythons, slid to his knees, and was force fed a northern Italian protein shake, but the four of them operating in tandem could probably take the Italian bull down and make him suffer a serious beating in the ratings. Yes, yes, I’ve already started that story in the backlog of my homoerotic wrestling fiction works-in-progress.
The newsman sitting oh-so-pretty at the top of the CBS morning heap of hunks is Chris Wragge. The gargantuan step up from Wragge’s predecessor to this blond beast cannot be overstated. He isn’t as classically handsome as Cuomo, nor does he seem to me to possess as much raw sexual energy. He has some odd, not entirely attractive quirks, like his frequently pursed lips and unilateral smirks. However, the reportedly 6’4″ blond, blue-eyed sexpot is unquestionably worth changing the channel for, for a little dose of morning adrenaline to wake up to. 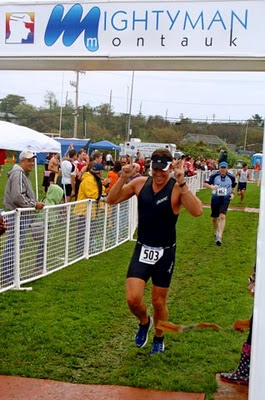 I’m not surprised at all the CBS decided to contrive a reason to follow Wragge around with a camera as he trots and bounces about in skin tight lycra. On Monday of this week, they aired a gratuitously long segment on his training and completion of the Montauk Mightyman triathlon. Yes. This is national news that a former college athlete (ivy league football? um, let’s just say he was a big man on campus), swam, cycled, and jogged his way across the tip of Long Island. What, you say? That doesn’t sound like national network news? Have you seen this man’s chest?
So my caps of the whole bodyworship segment sort of suck, because CBS’s online videos of their materials are not in HD (those bastards). But a few things can clearly be seen if you take the time to watch the video (especially if you watch it multiple times… trust me on this). First, the shots of Wragge jogging in Central Park illustrate a few things we just don’t see when he’s suited up for The Early Show. For example, he’s sans make-up and hair gel, so if you want to picture what he looks like waking up next to you in bed, this clip is for you. More compelling still, he’s dressed in tight grey training trunks that clearly show those big, powerful thighs of his have a nice bulge hanging between them. 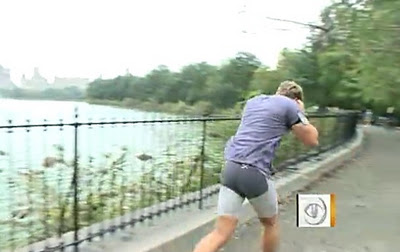 My first trip to the pause button, however, came when he jogs away from the camera. Wragge has got major league ass (probably necessary to balance out the impressive beef hanging down from the front)! Baby! Those big, round glutes pumping away suddenly make his credibility as a news anchor skyrocket… for me. 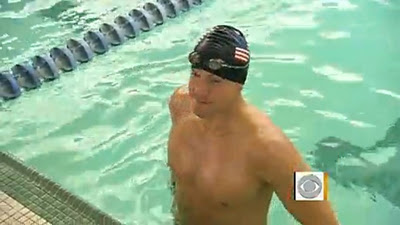 There’s a criminally brief and blurry shot of him training in the pool. It’s not entirely satisfying, but Big Boy is clearly sporting some big, bronze pecs with tight little brown nips. They may not be quite as lucsious as Cuomo’s, but I’d need to compare in a side-by-side pec-off, with lot’s of flexing and baby oil, to make sure.

Wragge clearly knows he’s the resident sexpot at The Early Show. I get the impression his self-consciousness at being extensively videotaped in muscle-hugging lycra isn’t exactly born out of embarrassment. Towering over his triathlon veteran buddy after the race, it’s hard to miss the cold hard fact that he’s a big, beautiful, muscled pretty boy who enjoys showing off his side cleavage, big round shoulders, and bulging biceps.

Just to prove the point, he’s posted this impressive shot showing off his grease painted race number down his rippling arm (yeah, sure… it’s the number he’s showing off).

The towering stud bitched and moaned about the 20 minute swim, but otherwise he seems pretty proud of himself for muscling his way through Montauk. The joy of accomplishing an impressive physical feat is, I’m sure, something that he should be proud of. I suspect there’s a strong possibility that his self-satisfaction after crossing the finish line may also include a healthy dose of narcissistic delight in knowing that those pecs, massive thighs, and gorgeous, powerful ass fill out a wet suit exceedingly well.

Knowing that there’s some man loving waiting for him might also account for his success in sprinting all the way past the finish line.

So I’m painting Chris Wragge with my own brush, of course. The big, gorgeous blond could be deeply insecure about his rocking body. Critical comments about his pursed lips and one-sided smirks could possibly cut him to the core, as far as I know. I doubt it, but I could easily be mistaken. But more importantly for my purposes, in my homoerotic wrestling imagination, Wragge is a supremely cocky and confident news stud who delights in having his muscles adored, who lives to have a camera lustfully study every nook and cranny of his powerful physique, and who struts around with his entourage of Jeff, Whit and Ben just itching to kick some competition ass. So sure, one-on-one I’d put money on Cuomo to be more devastatingly beautiful and victorious in a wrestling showdown. But I don’t imagine Wragge as ever feeling the ethical obligation to deal from the top of the deck or show up with anything less than all guns (and flunkies) blazing.