Time flies, and handsome muscle stud Cratos is already being ushered off the throne as reigning homoerotic wrestler of the month to make room for the hot hunk who scratched my itch most satisfyingly in a wrestling match released in the month of September.  Nominees include the rookie teen hotties Josh Steel and Brodie Fisher for their “Muscle Teen Scuffle” at Rock Hard Wrestling, as well as muscle hunk veterans and both former homoerotic wrestlers of the month, Zack Johnathan and Jake Jenkins for their RHW battle, “Tortured.”  I’m nominating Thunder’s Arena’s boys Austin Wolf and Hooper for Mat Rats 21 (check Monday’s post for why), as well as Lance Romance and Python for Mat Rats 24.  Of course BG East’s catalog 95 floods the field with a ton of contenders.  Instantly competitive among the BGE offerings are former HWOTM Denny Cartier and Alexi Adamov for their work in Leopard’s Lair 4, Z-Man (again!) for his work in Hunkbash 13, as well as both Diego Diaz and Stone Cold Kirby Stone on that same DVD.  Cage Thunder and Enforcer (both former HWOTMs) earn nods for their matches on Masked Mayhem 10,  and another pair of former HWOTMs, Jake Jenkins (again!) and Jonny Firestorm get nominations from me for Jobberpalooza 12: The Works.  Finally, I’m nominating a recurring fantasy man, Britboy Rob Chandler, for his all-in wrestling in Motel Madness UK: Sexfight. What a bumper crop of homoerotic wrestling gems to pick from!  As is so often the case, I’m torn… back and forth between several gorgeous wrestlers who’ve made me have to replenish my stock of lube in September. If I have to just pick one, which is usually my self-discipline, I’ll beg for forgiveness from the runners-up and give my nod to… 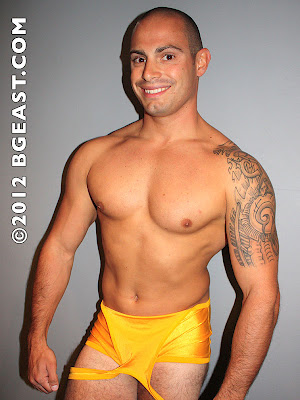 This is Denny’s second grab at the ring, having worked me hard back in December 2010 for his oh-so-beautiful “welcome” of Attila Dynasty to the world of BG East wrestling.  Denny’s re-ascendancy to my monthly favorite status occurs for his essentially 3 distinct matches in Leopard’s Lair 4: Denny’s Double Duty.  Let me just state up front and as adamantly as possible: I think Denny is absolutely and unqualified a stunningly gorgeous specimen.  That said, I also feel the need to say that his two opponent’s in Leopard’s Lair 4 are unquestionably “prettier.”

Alexi Adamov, in particular, is just about as pretty as I’ve ever seen Alexi, and Alexi fans know just how pretty we’ve seen this dizzyingly handsome hottie.  Alexi “deserves” the homoerotic wrestler of the month award for the depth of his resume and particular gorgeousness in this, his latest release; however, it says something that with the stunning visual beauty of Alexi in the ring, my eyes were glued to the fantastically suffering Denny!

Denny sails with an even keel.  I’m not sure if we’ve ever heard him really toot his own horn (which is an activity I’d be happy to do in person anytime he needs it).  He’s a cool character, quietly confident in his fantastic depth of mat skill to make anybody, even a 6’1 inch Russian muscle hunk, have to work his ass off to avoid getting used and abused by Denny’s speed, strength, flexibility and awesome awareness of his own body.

It may be a toss-up as to which of Denny’s opponents own him worse in Leopard’s Lair 4.  Alexi absolutely launches Denny into the stratosphere, again and again.  When they’re both on the mat, Denny puts the beautiful, big boy to his back and makes him cry a couple of times, but holy shit, Alexi works out some major frustration on Denny’s sweeeeeetly suffering bod.

The big Russian’s completely unnecessary roughness is fantastically hot.  For example, Alexi unwinds one of his wrist straps to choke Denny.  He doesn’t need to do this at that point in the match.  It provides no strategic advantage.  It’s just fucking brutal, sadistic, and Alexi is absolutely loving doing whatever the hell he wants to do with Denny’s bod!

When Aryx Quinn gets Denny to the ring in their head-to-head, the results are pretty much the same, even if the means are different.  Alexi totally outmuscles Denny, while Aryx is the classic, nasty heel he always is.  Denny takes a double-helping of bashing between the two of these boys that drives me insane with lust for him.  He’s one seriously tough little mother fucker who I just can’t get enough of!

However, the tipping point in my mental deliberations leading me to give Denny the title is really the mat tussle he has with Aryx before he heads upstairs and gets his hot ass handed to him on a platter.  He absolutely owns Aryx in the mat room!  Unleashing every amateur skill, of which he has a seemingly inexhaustible arsenal, he plays Aryx like a maestro.  He takes the notorious bad boy down at will.  When Aryx starts to take it personally, Denny begins to not just take him down, but hold him there, humiliating him more and more, making him squeal a little.  Aryx is the royal dick he always is (and for which he has a billion fans!), but for me and what strokes my kink, it’s the moment Denny starts to taunt him that sends me into overdrive.  He flexes over top of wailing Aryx.  He crows and preens, soaked in sweat, absolutely dominating the pretty pretty pornboy like a school yard bully.

I’ve said to the boys at BG East that if ever Denny seriously dips into the dark side and stays there, he’s going to give even the likes of Kid Karisma a run for his money when it comes to owning my slack-jawed loyalty.  That glimpse he gives on the mat, flexing his biceps over a cowering, impotent, humiliated Aryx, sneering and taunting, doing push-ups on Aryx’ pecs, growing just a little inebriated on his own physical power and mastery of his opponent’s overinflated ego, makes it completely impossible for me to keep my hands off.

For the range, the endurance, the buckets of sweat, that sweet ass, that dimpled chin, those luscious pecs, and the supreme and well-founded confidence in his mastery of the art of mat wrestling and his mastery of narcissist muscle stud Aryx, and especially for that double bicep, growling and preening, Denny Cartier joins the elite of the elite as a two-time homoerotic wrestler of the month!