As a lover of expressive language, I tend to hold contempt for text-talk (smh), but this tidbit I recently ran across leaves me with nothing to say except for “TMI.”  It was the headline “MMA fighter sues sex shop over burnt penis” that sucked me in, along with an arousing photo of said MMA fighter, Michael Waylon Lowe.

So the gist of this story as best I can tell from reading it multiple times on different sites (because it’s a little unbelievable and hilariously/tragically salacious) is that this hard-bodied fight machine was playing the part of the hard-bodied sex machine with his fiance’ (who has no penis, sadly), when during an intermission, his cock began to burn and swell up to alarming proportions.

Just let me be clear.  This sounds like serious shit.  There’s a bit of tongue in cheek to a lot of the online coverage of Lowe’s lawsuit (I mean, his cock swelled to alarming proportions during sex… please), but if even half of his injuries are real, he deserves a healthy dose of sympathy and some serious respect for publicizing these details in his bid for a monetary settlement for his pain and suffering.

But there’s just something too provocative about the alluring concoction of details that compose this story.  Juxtapose a ripped, handsome MMA fighter and the details of his application of sex gel and my one-track mind leaves behind the potential merits of Michael Waylon Lowe’s claims against Kama Sutra Pleasure Balm Prolonging Gel.  Instead, I’m helplessly left to imagine what a far, far better world it would be if MMA competition always involved “pleasure balm” (not the kind that leaves you permanently scarred and dysfunctional, though). 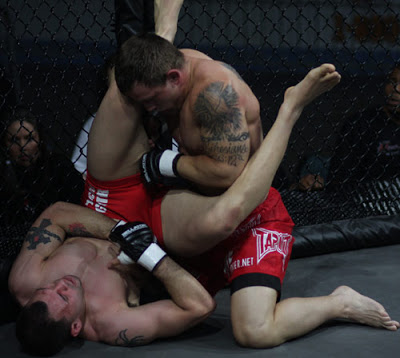 I like the intensity of MMA competition.  I don’t watch it often, but when I do, I’m stoked hard and breathless right quick.  There’s a powerful eroticism to the element of danger, of two ripped, conditioned, highly trained combatants using their bodies to hammer, choke, or rip each other apart.  It’s an element that I miss when homoerotic wrestling is too playful, silly, or slapstick.  I like stakes, tension, and competitive aggression.
I also like explicitly homoerotic content, with two wrestlers above-the-table turned on by one another.  I think the sweet spot for me typically resides when these two elements (competitive intensity and explicit homoeroticism) are perfectly balanced.  If the intensity and competitive spirit are lacking, the hottest bodies in the most explicitly erotic circumstances can sort me out, but they don’t hit me where I really live.  And as I said, I don’t often watch MMA for the same reason (along with frequent homophobic ventures of prominent MMA personalities).  All physical aggression and combat can sort me out, but I’m typically providing some erotic backstory in my own imagination to connect all the dots that truly entertain me.
Back to Mr. Lowe’s burnt and disfigured penis, though.  Fuck, that sucks.  If you’ve had similar results from using Kama Sutra Pleasure Balm Prolonging Gel, let us know.  Play safe, fight hard, and keep fucking!

One thought on “TMI”