Eye of the Cyclone recently rebooted a new story arc for a once defeated superhero, Subzero. Years ago, Subzero was betrayed and conquered by his former partner-turned-villain Cobra. Fortunately, Subzero was able to survive and return to his ice fortress for extended hibernation and recuperation (to say the least). Proving that we could all use our beauty sleep, Subzero possessed a lean “swimmer’s build” body when he went into deep freeze, but emerged from his 0 Kelvin spa-years with a bodacious bubble butt and hot, hot, hotly muscled everything!

Like all epically hot, beautiful superheroes, there’s nothing more compelling and sexy than seeing Subzero back in a new chapter and instantly in a hot latex-laden battle with a big, bearish brute who goes by Xtractor. Just released last week, the second chapter of this serial features the threat of aggressive sucking, a bearhug, and a superhero’s erect manhood crushed. 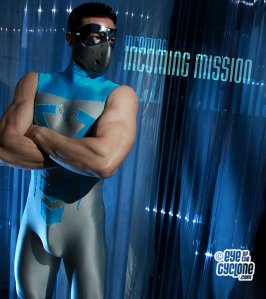 D-d-damn! If Subzero needs a sidekick-with-benefits, can please someone at Eye of the Cyclone let him know I’ll watch his back for him?  A lot.