Welcoming again guest blogger Alex to give some insights into a corner of the wrestling world I just don’t keep track of these days.

The best description of this comic book I read was at Scans Daily. The poster said: “Imagine a PG-rated version of Sin City where instead of shooting each other, everyone randomly hits each other with wrestling moves!” 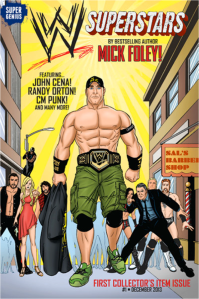 It’s set in seedy and corrupt Titan City, which is run by the McMahons, of course. They’re referenced, but only Triple H is seen.

The story focuses on three guys: Randy Orton, John Cena and CM Punk, but many more WWE ‘superstars’ are prominent side characters. Cena is a cop who was framed for stealing the Money in the Bank briefcase with $10 million. Orton is running for DA against Alberto Del Rio, in a feud with Daniel Bryan and looking for the MITB briefcase, too. CM Punk is a community activist who “wants to bring the whole system down”.

Written by Mick Foley (and maybe a ghost writer, who knows), the comic takes itself seriously, even if readers don’t. I think it’s intended to be a parody, but I don’t know that for sure. I do think they missed an opportunity to go further with the concept. I would have had the characters in their ring attire. Walking around, working, eating, giving interviews, but always in trunks, tights, etc. as though it was normal. That would have made Titan City really unique and I think pushed the idea to a higher level.

Below are some scans from the issue. The most action revolves around Orton (first four scans), followed by Cena (next two). CM Punk doesn’t get much action, so I’ve only included one. 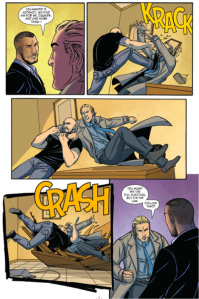 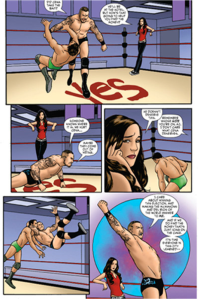 Orton beats up a jobber while setting up Cena. Daniel Bryan vandalized the ring earlier. 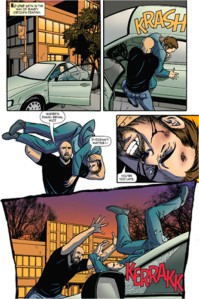 Ryback beats up reporter The Miz, trying to get information about Bryan out of him. 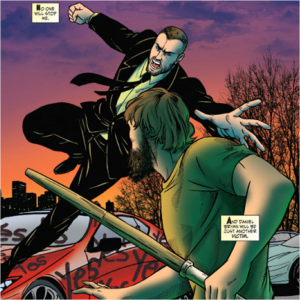 Bryan vandalizes Orton’s car. The issue ends on this as one of three cliffhangers. 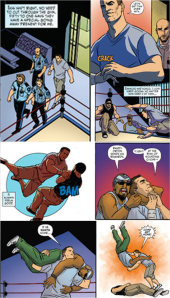 Of course they pass a wrestling ring on the way out of prison. Cena gets attacked, but beats down his assailants. 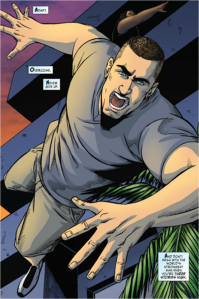 AJ sets Cena up, sending him right into the waiting arms of an angry Mark Henry who throws Cena off the third floor balcony in another cliffhanger. 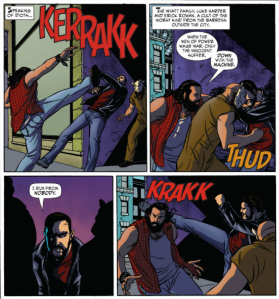 Community activist (anarchist?) CM Punk fights off the Wyatts. Interestingly, he runs into Shield, but they don’t fight.

The book was $1.99 and I thought it was good enough that I’ll be back for issue two. I’m probably the only guy who’s read it, but what do you think of the premise or pages you see here? Would love to read some comments!

3 thoughts on “WWE Superstars: The Comic [A Review by Guest Blogger: Alex]”