Braden Charron is pretty proud of himself.  Of course, he should be. Have you seen his physique!? But he’s proud of himself not just because he has the body that stars in a thousand gay men’s fondest fantasies. He’s also proud of himself for figuring out a clever way to scratch a particular itch.  You see, he told his opponent in Muscle Domination Wrestling’s Oil Hunks 2 that he wanted a wrestling match with him.  In fact, what Braden’s really itching for is a beaten-into-submission muscle worship session with the poor, lucky bastard forced to lather Braden’s bulging muscles in oil and give him all the adoration that Braden so richly deserves.

Braden telegraphs that something is up when Hunter James shows up and Braden asks him if he’s ready to “wrestle.”  Literally, Braden uses air-quotes around the word “wrestle.”  Of course, Braden’s pre-match instruction for the kid to bring a bottle of baby oil might also have tipped Hunter off.  To his credit, Hunter isn’t shy about immediately obeying Braden’s commands right off the bat, obediently breaking out the baby oil and startingto put a pretty shine on Braden’s hot body from the ground up.

“So what I want you to do is take your time, get down on your knees, put some on your hands, and start from ankles up, one leg at a time, and take your time, cause I want these calves to start showing.”  To his credit, the kid dives right into the opportunity.

Oil Hunks 2 is muscle worship punctuated by brief outbursts of entirely one-sided wrestling domination. Braden toys with Hunter, keeping the kid at heel with voice commands alone, but then relishing the feel of his slicked down muscles torturing the skinny punk in a camel clutch, a full nelson, body scissors. The precise formula is about 4 parts worshipping Braden’s beauty to 1 part suffering Braden’s punishing ways.

“Rub it in good. Massage it. Rub it in real good. Enjoy it. Enjoy what it feels like to be rubbing a real man!” Braden coos deeply.  Unlike the twink from Oil Hunks 1, Hunter doesn’t look like stroking Braden’s ego is heavy lifting. However, he doesn’t look like he’s enjoying it one tenth as much as I (or you) would.  While I get a kick out of seeing the punk in total and absolute submission to Braden’s will from start to finish, Hunter doesn’t have to adjust his own crotch even once, despite rubbing baby oil all over Braden Charron! What the hell?

“Many men would love to be doing what you’re doing right now,” Braden explains as he command Hunter to once again coat his phenomenal physique in baby oil, really rubbing it in to Braden’s beautiful glutes. And that’s the real rub, in the middle of all of this rubbing: although Hunter James doesn’t look like he minds this assignment, he doesn’t look the the luckiest son of a bitch on the planet. His ministrations are functional, but hardly enthusiastic.  When Braden gives him a naked muscle posing routine to enjoy, Hunter calmly, perfunctorily mutters, “Yeah, that’s awesome.”  Read that quote like the 80’s porn actor who discovers that the massively muscled and humungously hung pizza boy has an impulsive need to get naked and fuck. “Yeah.  oh.  yeah. that’s. really. great.”

Braden Charron fans line up for a big drink of Braden right where you want him. Wrestling fans, buyer beware, because there’s zero “combat,” just a smattering of actually wrestling holds, and very little real heat. For my personal kink, I still think that MDW is waiting for the wrestler who can really pull this off on the catching end.  Brad Barnes and Braden Charron as snarling, dominating muscle bullies is a fantastic innovation, but the Oil Hunks series is still looking for the playful, eager, I’ll-make-you-work-for-it-but-I’ll-be-thrilled-to-be-forced-to-worship-you costar to really turn this franchise into a barn burner. This is “homoerotic wrestling” fare in the technical sense, and there’s plenty of audience who will love the hands-on-Braden motif, but this doesn’t quite count as homoerotic wrestling (sans air quotes) for me.  I hope MDW keeps at this nuanced alchemy, because the promise is golden, even if these first couple of attempts haven’t quite catalyzed. 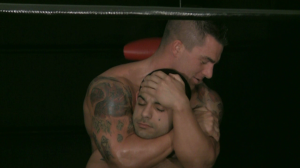