August posted a surprisingly deep field of contenders for the HWOTM title.  It was one of the months where my affections leaned different directions daily, based on what I was enjoying last. I honestly thought that the title was headed in one direction, but then, examining the depths of my soul and extent of my arousal, I had to confess to myself that I was simply defenseless against the next-level performance of one particular muscle stud who has long known exactly how to push every button I’ve got.  My new and returning homoerotic wrestler of the month is… 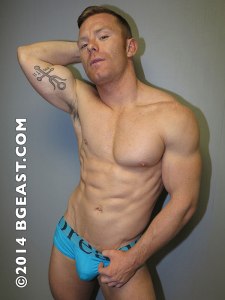 Now I know there are a smattering of sight-impaired individuals who don’t have the good sense to be as completely infatuated with Kid K as I am. I won’t hold it against you.  Kid K, however, might track you down, snap on a standing head scissors and pop your skull like a grape. Which would only cement my infatuation further, of course. It was his mat match with seasoned scrapper Ray Naylor in Undagear 22 that possessed my attention and adoration so completely again this month.

Ray is understated. In fact, I’d say it’s a weakness of his. He wrestles like a cornered badger, which is insanely sexy, but his personality is pretty muted in the world of bigger than life pro wrestling personas he swims among.  Then again, there’s something balanced and complimentary about Ray’s understatedness in Undagear 22, because Kid Karisma is even more a larger than life character than usual. Ray’s reticence leaves room for Kid K’s bulging ego and thoroughbred trash talking to just keep swelling and filling up the mat room.

I’ll even give it to Ray (and this is pretty much the last of my comments for him, since this is Kid Karisma I’m crowning today), he makes Kid K work for it.  He digs his fingertips into that award winning ass. He squeezes the fight momentarily out of the mass of muscle that is every inch of Kid K’s stunningly hot body. He makes him sweat, which makes all of those bulging muscles glisten, which makes me swoon. And there’s an unmistakable mutual admiration between these two sexy battlers, each one copping a gratuitous feel when the opportunity arises. I’d cop a feel of Ray’s biceps, too.  He may have lost to Kid K on the mat and Dr. Cooper in the Friday Fashion poll, but I’d give a spare kidney for a bottle of baby oil, that lime green jockstrap he wore while crushing Drake Marcos, the BG East ring, and absolutely nothing else but smoking hot Ray.

But he’s up against my reigning overall favorite homoerotic wrestler in Undagear 22, and Kid Karisma ignites the most exhausting fantasies I’ve got (and that’s saying a lot). If I’d give a kidney for a go at Ray, I’d give a cardiac ventricle or two for what’s left of my fleeting life at the point to feel Kid Karisma’s rugby honed thighs wrapped around me and playing me like a pump organ. This match continues the run of Kid K’s battles where it’s a little more like holding court than competing. This is Kid K’s mat, his match, his story to tell from start to finish. Even when Ray works very legit offense on the mighty man of muscle, it’s all about Kid K’s superhuman tolerances and Tom of Finland physique.

There’s both a contempt and a lust shared between these two that’s intoxicating to watch.  Kid Karisma crushes Ray’s face against his crotch.  He flexes over him, shoving his mountainous muscles humiliatingly into Ray’s dazed mug. And then, demonstrating the effectiveness of the double-edged offense of the karismatic one, Ray can’t help himself but squeeze Kid K’s muscle packed thighs appreciatively.  It’s not like he can mount a defense most of the time, so instead, he’s helpless to stop himself from stroking and squeezing that impeccable physique that I still say absolutely needs to be in contention for the Best Body of 2014 award in a few months.

This match is not a squash and it’s all heading in one direction from the start, all at the same time.  That’s a fine balance to maintain, holding suspense, building anticipation, and yet remaining always and unshakably with Kid K at the throttle. He twists and ties the lean stud up, crushing and wrenching and squeezing about 5 things at once, leaving hard as nails Ray writhing and, finally, reluctantly, bitterly entirely spent.  Kid K sucks the fight out of him and leaves Ray so wasted he can barely lift his hand to stroke the slab of granite Kid K calls his left quadricep. Oh, but he manages.  Up until this point in the match, I’d say Kid K is in contention for the title of HWOTM, but perhaps hasn’t sewn it up quite yet.  And then, as if reading my mind…

…Kid Karisma peels off his designer underwear and throws it in Ray’s face, strolling out the door with that world class work of art he calls his ass bare and beautiful and glistening with sweat.  The camera, understandably, follows that bare physique, but I have to imagine Ray found the energy to pry himself up on one elbow and soak in the sight of this fantastically honed, entirely naked gladiator who just ran him down like a bug on the highway. And there’s just no competition left at that point. Kid Karisma manages the trifecta: 1) reminding us that his is the best ass on the planet, 2) making an extremely convincing bid for the title of Best Body for this year’s voting, and 3) making me completely forget about whoever it was that I was almost ready to crown HWOTM. Joining the extremely elite class of competitors who’ve managed to grab hold of the title on 3 different occasions, my reigning overall favorite homoerotic wrestler and now my homoerotic wrestler of the month and frontrunner for my vote for Best Body of the year, Kid Karisma.