There’s a deep comic book nerd lurking inside this homoerotic wrestling fanatic, and no one strokes that part of me harder than Eye of the Cyclone.  This week’s newest chapter is the “Hard as Ice” comic starring smoking hot hunk babyface hero SubZero.

As is so often the case with mouthwatering muscle hunk heroes like SubZero, he’s in serious jeopardy as the Xtractor, the sadistic supervillain, is stomping the living shit out of SubZero’s hot, latexed body from top the bottom. His pristine silver and baby blue skin tight suit is getting soiled underneath the dirty boots and oil stained hands of the bloodthirsty (well, I’m guessing his thirsty for one bodily fluid or another) bastard. 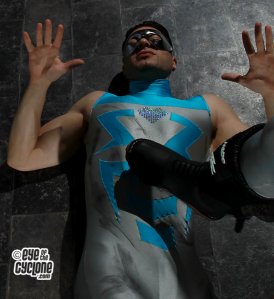 I know there are a lot of wrestling fanatics particularly into trampling, and Xtractor clearly has you kinked sadists in mind as he pounds that big, weighty combat boot over and over into the ripped hunk, backward to front, top to bottom.  The superhero is stunned and dazed, not able to summon his super freezing superpower to defend himself.  All the muscle, all those skills, that smoking sexy goatee… none of it amounts to more than a beautifully bulging doormat.

But here’s where things get interesting.  So far, this could be some straight-up comicon b-side, but it turns out, to Xtractor’s astonishment, the more SubZero gets trampled by that big hard boot, the harder his dick grows. Hello!  Our handsome hero suddenly grabs his raging cock and strokes himself harder and harder, even as he starts to worship that massive, torturing boot pinning him to his back.  Holy fuck! SubZero loves this shit just as much as you and I do!

No, I mean seriously, SubZero loves this shit every bit as much as you and I do, and that’s his real secret power.  Because the harder his cock grows, the more his super freeze batteries get recharged. And by the teaser of this photo, you can tell, his super freeze batteries are HUGELY recharged!  The sultry, hot hunk blasts his torturer into the wall, driving freezing blasts into Xtractor, starting with his crotch. It also helps the super freeze juices (ices?) to keep flowing for SubZero to continue stroking his cock and playing with his own balls.  Now that’s a superhero I can get behind!  I mean, really, really closely behind.

That fucking coward Xtractor manages to teleport his sorry, beaten ass out of the picture before SubZero can freeze his poor, stunned, limp dick off.  Our hero his victorious as he rolls on his side, clutching his battered chest, showing off that mouthwatering ass.  There’s not an inch of this luscious stud that I’m not ready to massage soothing, recuperating oils into to aid in his recovery from this epic battle from which he and his raging cock have decisively emerged victorious. But wait, the scene is “…to be continued…”  Xtractor has left some vile looking mechanical device behind, positioned ominously right next to SubZero’s gorgeous ass cheeks (where I, by all rights, ought to be!). The hard, horny superhero doesn’t see it!  Oh shit, this isn’t over!!!!

There’s so much more to see and read of this and hundreds of other hot superhero/supervillain homoerotic battles at Eye of the Cyclone.  They continue to serve up something I just don’t see replicated anywhere else.  If you’re even half the nerd I am, you owe it to yourself to check them out.