It’s atypical for Drake to be prompt in his writing, so I take it as a good sign that he’s already sent me part 2 of his sequel to my New Year’s fiction. It’s oddly provocative to read the same narrative I wrote just a couple of months ago told through the perspective of a different character in the scene. The Cheshire Cat sure seems to me to be building up a sweaty head of steam in his writing thus far, which, again, makes me suspect yours truly is going to take quite a pounding before this saga is over. Nevertheless, I’m thrilled to read Drake’s eloquent prose and committed to posting the product of his vengeful homoerotic wrestling imagination to the bitter end.

That is not the case with Kid Leopard. Well, for me anyways…

I’ve known the man for years and even after spending this long working for the man I still haven’t been able to glimpse a chink in the armor. He’s completely inscrutable. I haven’t been granted a peek inside the cogs of the machinery of the massive intellect of the Big Man Upstairs of homoerotic wrestling. So when he told me about this private custom bout, part of me wanted to believe this was a test from him. A shot at redemption.

He told me that the person had commissioned a no-holds-barred match between me and Trey…what I heard was “take on Trey and wear the wiry, muscled hunk out and your prize is a nice piece of med rare blogger-jobber steak.”

I salivated at the thought.

I threw myself into the gym with everything I had in the weeks leading up to the bout guaranteeing that I would not be caught with my pants down this time. I would be ready for the fellow BG alum as well as the fawning fanboy of Yawn Dumont and the High Priestess of the Church of Kid Karisma.

I was ready for a rebirth. A rebranding. A Drake 2.0 (Drake Machina, if you will).
I stood in the lobby of the facility, my mind swimming with thoughts of what I would do to Trey (and then Bard…mostly Bard), stoking the fire of my hard-on. It was throbbing uncomfortably hard in my jock. I had to stop myself from nursing and teasing it too much. As much as I yearned for release, I also knew this was not the time. Nor the place (like all over Bard’s face.)

A  knock dragged me rudely from my reverie as I jogged across the lobby to open the door. Who is that rapping at my chamber door?

I stopped cold… my throat went dry as I eyed the blogger that had sunk my net worth in the eyes of homoerotic fans. And then the thoughts of me doing the same thing to his stock pushed their way to the forefront. My cock throbbed as I looked him over. After a moment, I lifted my chin, rolled my eyes, and then waved him in dismissively and headed to the ring, leaving him to follow in my wake…as he should.

Not now, Drake…not yet… I cautioned myself as my nails bit into my palms from the white-knuckled clenching of my fists as I heard him chuckling behind me.

I entered the ring room and forced a smile at the Boss who greeted me with an order. My pride took a direct hit.  C4 aka Clean the ring. You sunk my battleship, I thought, my shoulders slumping a bit as I filled the ring bucket with the pungent green disinfectant and climbed into the ring, scrubbing the mats to pristine, camera-ready perfection. Like I’ve done oh-so-many times before.  Relax, Cinderella, I chided myself as the two jabbered like old biddies outside the ring, it’s almost time for the ball.

I finished the mats, swearing to myself that this would be someone else’s bitch job after today, and spent a while fiddling with my iPhone as we awaited the arrival of my very overrated co-star Trey Dixon. We waited.

The mats were long dry when he finally showed up. And if I know the Boss as much as I like to think that I do, I was grinning ear-to-ear, anticipating a classic Kid Leopard tongue-lashing about professionalism and wasting people’s time.

That’s it?!  I thought five-seconds later when a smiling Trey escaped unscathed and entirely unbothered by the Boss’ quick scold. I seethed as I stared at Trey’s tight muscular ass and  followed him to the locker room. 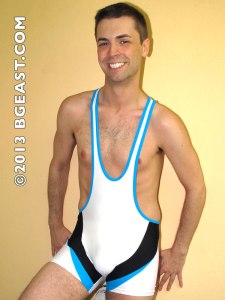 I stripped down and pulled my gear selection from the locker, the singlet I wore against Ray Naylor. Despite the damage that this little number took from being used as a weapon against me in my match with him, the fabric was resilient and held up quite well. I remember all too well just what transpired in that match, but I looked fucking fantastic in it.

I pulled the straps up over my shoulders and stared at the little mirror on the inside of the locker and flashed my signature smile as I fluffed my chest hair before closing the door and turning to face my opponent du juor.

Trey isn’t known for being very talkative. He is however, known for being just a little too infatuated with himself. And when I say that, I mean this is Narcissus level infatuation. (Or if mythology isn’t your thing, think Ty Alexander’s facebook wall).  I found him gazing at himself in the floor-to-ceiling mirror, flashing his pearly whites and pursing his lips duck-style,  the singlet straps dangling as he flexed his cut pecs and shredded abs and snapped selfies of himself that would no doubt end up on Instatwitter or some shit for his mentally unstable fans’ consumption. 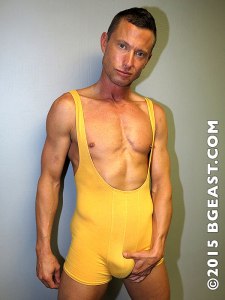 damn good. The bright yellow of his selected singlet complemented his Socal goldenboy tan quite well. But still…I don’t see what they see in him. I patted my throbbing cock as Trey pulled his singlet straps up and threw me a wink as he bounded out the door as we heard the Boss emceeing our announcements despite not knowing (or more likely, caring) if we were even close to being ready.

I think Rachel Maddow was on that night…

I stood in the silent locker room for a moment, steeling myself for what I knew was going to be a battle for something more than just this private collector’s enjoyment.

This was a battle for the name, and dignity, of Drake fucking Marcos.