So, sure, it isn’t Friday today, but I’m late reporting the decisive outcome of the last Friday Fashion poll.  Pulling in more than 59% of the vote, spanking both of his contenders handily, the winner is clear.  You know those distinctive red trunks with the black side panels and stylish extra black stripes?

Stone has not really been on my radar before now, but doing my research for this Friday Fashion poll has convinced me that I need to remedy that oversight. That adorable babyface with an epic chin like that is striking. His insanely ripped torso is breathtaking, and I’m infatuated with his luxuriously hairy legs. But definitely, a strong selling point is his ability to wear those trunks like nobody else!

Somewhere I seem to remember hearing that the curly haired cherub is an experienced indy pro wrestler. Still, I think no other opponents are going to treat that gorgeous body quite like BG East heels do, and, on average, his BG East fans have got to love his work more than the straight up pro fans by a factor of at least 20.

I’d like to propose an entirely new genre for homoerotic wrestling, in which we slather wrestlers in maple syrup and the loser is the one who gets licked clean first. Furthermore, I nominate ripped stud Stone to inaugurate what would be this barnburner of a new series.

In the mean time, congratulations are in order to Stone, because although it appears he has had a rough time of it in the BG East ring thus far, when it comes to those sexy red trunks, that gorgeous round ass, and that tasty, tantalizing bulge, no one else came close. 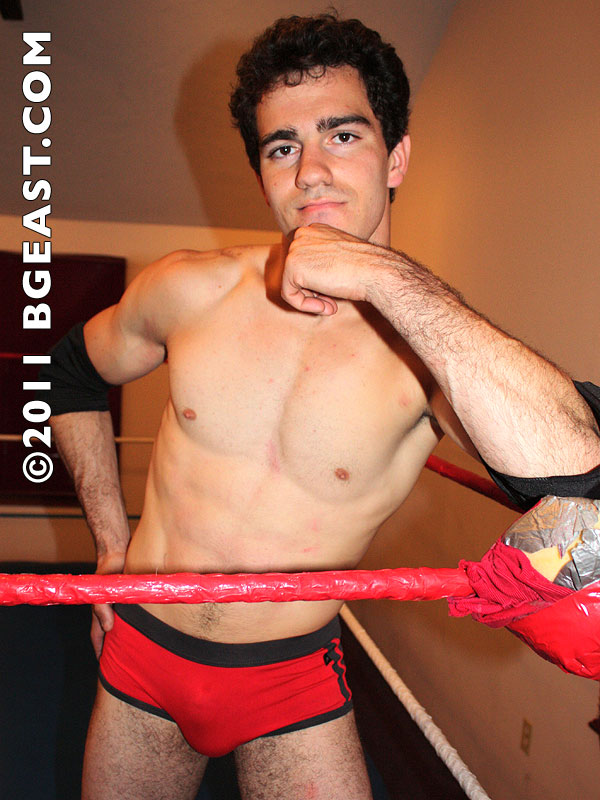