New releases last month included several surprises, not all of them good, mind you. My policy for several years has been about accentuating the positive, rather than harping on what I don’t like, though. That’s why I routinely don’t approve comments from readers that cross the line from constructive critique and comparison to personal attacks, body shaming, or just plain nastiness. It isn’t that I like everything I see. I just don’t want this blog to be a bitch session like 95% of every other inch of the internet. So whatever didn’t hit its mark last month, I want to focus in on a particular wrestler who did. For turning my crank, making me sit up an take new notice, and getting me off in a way I honestly was not expecting, the new homoerotic wrestler of the month around these parts is… 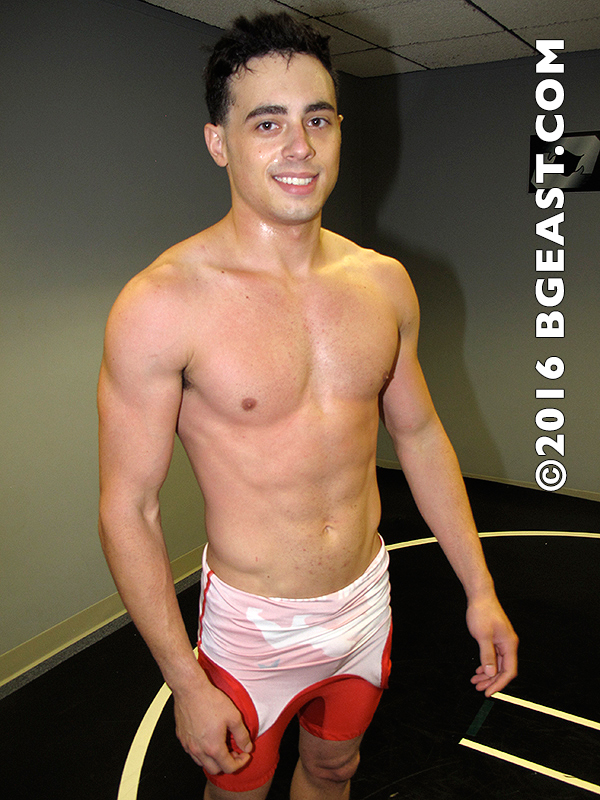 I was a Richie fan from the moment I first saw him debut a couple of years ago. He has a virginal quality. It’s that ephemeral vibe that a doe-eyed, dimpled chin man-boy can possess that gets us talking about him as a “boy next door.”  Not that my next door neighbors have ever looked like this babyface beauty.  Richie is more the boy I grew up wanting to live next door, and wanting to be best buddies with him, and wanting him to be as wrestling curious as I was.

Richie’s Sunshine Shooters 8 match against Goren Ford fired on all cylinders for so many reasons that I’ve mentioned before. There’s a daddy/boy element to the pairing that’s phenomenal. I actually have no idea what the actual age difference may be, but Goren presents as a magnificently masculine baritone to Richie’s more delicate second tenor. Richie is 5 inches shorter and a good 30 pounds lighter, which regularly draws out 3 dimensional contrasts in the interactions between them. When Goren is towering over him and muscle bullying our boy next door, there’s a super sexy daddy’s home appeal that harkens back to Goren’s scorching hot Dark Knights 12 debut. But when Richie is shocking daddy to his knees, leveraging his lighter frame and calm, calculating skills to make this grown man weep, the daddy bashing is like an intoxicatingly delicious vintage made just that much more thrilling for how rarely it’s ever been bottled.

But Richie stands out in the match in no small part for turning a corner. I knew Goren was into brutal, erotic wrestling foreplay, but I was honestly just a little shocked when the big man is appraisingly squeezing Richie’s lush left pec, and our virginal boy next door just leaves his arms hanging at his sides and smiles up at him. It’s no nohomo machismo shit. It isn’t that he’s somehow failing to read the signals here, somehow missing Goren’s obvious interest in dialing this match up to fuck stakes. “So you like shoving your balls in a man’s face, huh?” Goren asks, calling out the boy next door for exacting a humiliating submission with his balls smothering Goren in a schoolboy pin. “You like that?” Goren demands that Richie say with his mouth what he’s been screaming with his sweat soaked golden body for the last 15 minutes. “Maybe,” Richie smiles brightly, taunting the big man with just a teasing hint of what he wants.

Goren drops to his knees and peels the soaked singlet off of his shockingly game opponent. He strokes Richie’s torso. He reaches out and almost lovingly cups Richie’s balls like a promise to be an attentive lover. “You like that kind of shit?” Goren coos, leaning in, towering over him, seducing him into making this Richie’s breakout debut in the unambiguously erotic ranks of homoerotic wrestling. “Maybe,” Richie replies, his eyes locked onto Goren’s gorgeous face, reading the carnal intent written at the twitching corners of his mouth. “I think you do kind of like that,” Goren posits, reeling this boy next door in another half an inch to shore. “So what if I do?” Richie asks rhetorically, his gaze unflinching, his hands relaxed at his sides as he permits the big man to fondle his hefty package.

“I wonder what else you like,” Goren muses, reaching around hand grabbing a huge handful of Richie’s sweet ass cheek. And then right here, right at this moment, Richie doesn’t just make the decisive move that makes me anoint him HWOTM. He sums up what I think is the heart and soul of homoerotic wrestling when he lays down the sexiest, sweetest, most raw and real challenge that I’m always longing to be at the heart of my favorite wrestling. “Why don’t you find out?”

It makes sense that Goren continues to be the sexual aggressor for the remainder of the match, for the most part. While lovely Richie does persist in shoving his ample package in Goren’s face repeatedly, it’s Goren who ups the ante by sticking out his tongue and hungrily licking up and down Richie’s inner thigh before opening wide and massaging his balls inside his mouth. It’s Goren who mounts the kid’s ass and breathlessly flexes his glutes, grinding his crotch into Richie’s virginal ass. This is familiar territory for the muscled Dark Knight, while, at least on camera, this is all new territory for little Richie.

But what I love so much is that Richie lets him do it. He’s fucking fearless, not just in accepting this catchweight challenge, but in not even blinking when the content and implied stakes abruptly veer into unvarnished lust. It could have turned fumbling and embarrassed. He could have, understandably, let show at least a little fear that Goren’s beautiful, thick cock was aching for his sweet little ass. But he doesn’t, and in fact he drives big daddy to complete distraction and, with a mature, steady hand, absolutely rips Goren apart when he’s gagging for it and vulnerable.

I was totally thinking that little Richie was in over his head, but it’s clearly the other way around. He makes Goren pay hard for wanting so much to be the first to plant his flag in unclaimed territory.  Richie could easily cripple the screaming, wailing, writhing, completely shocked daddy. He nearly does. Goren has been his own undoing.

In a last gasp of concentration on victory, Goren nearly gets the decisive, final fall with a vicious, vengeful single leg crab. Richie kicks free, just barely. He’s on his back, with big daddy already climbing on top of him, sliding into place to return the favor for all of his ball-gag schoolboy pin smotherings. He can taste victory, or, more like, he can already see in his mind’s eye little Richie gagging on defeat shoved down his throat. But Richie agilely slides back and snaps his gorgeous thighs around Goren’s ears.  He reaches down and grabs the back of his opponent’s head, pulling hard, entirely blocking both nose and throat from breathing in oxygen for the big, mouthwatering bulge grinding into his face. And then Richie leans back, smiling a huge, toothy, adorably ear-to-ear smile, knowing that his time has come. His eye lids flutter just a bit. His jaw loosens as he feels Goren start to go limp, buried in his crotch. “Oh, yeah!” Richie gasps, feeling deep down in his core the joy of his first victory in the unambiguously erotic end of the gay wrestling pool.

And not only is Richie all man. He’s also my reigning Homoerotic Wrestler of the Month.