There were several outstanding candidates for Homoerotic Wrestler of the Month for the last month of 2017. The new releases were varied and outstandingly sexy, with notable appearances by a number to deserving hunks. Newbies and veterans alike turned my crank and made me stand up and cheer, but one hot hunk edged the fierce competition with sheer tenacity. December’s HWOTM is none other than… 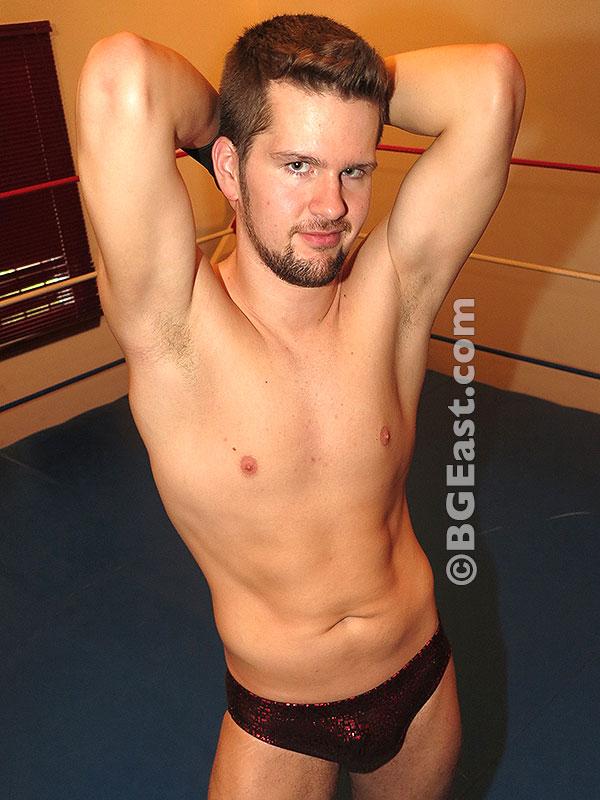 Not every Wrestler Spotlight adds up to being HWOTM, but Kayden’s debut Wrestler Spotlight easily hands the title to him. All three matches in the collection are fabulous. Kayden digs into Carter Alexander, Kirk Donahue, and Richie Douglas with studied, personalized brutality.

Kayden’s magnificent demolition of hot bro Carter Alexander was entertaining enough to earn my vote for Best Squash of 2017. The optics are outstanding. Kayden’s red trunks are perfection on his tall, smooth, sexy body.  Carter is the rare opponent who’s tall enough to pretty much look Kayden in the eye, so the apparent evenly matched set-up is that much more titillating to watch Kayden beat the living fuck out of the pin up boy mercilessly. Everyone hits the pause button when Kayden grabs the back of Carter’s trunks and yanks them violently up the pretty boy’s ass, giving Carter fans more of what we love about him so much.

During my interview with Kayden last summer, I nearly had to take a break because his legs were turning me on to distraction. So, watching those mile long beauties squeeze and crush Carter to screaming, weeping agony make a particularly potent image for me. The match as a whole is a contender because both studs are contributing maximum effort. Carter is selling like a mother fucker, and ever since he let slip to Kid Karisma in a moment of passion that he enjoys getting his hair pulled, I can’t help but picture him settling in with the remote control and a bottle of lube to get off on watching himself yanked around and cracked in half in this match.

Nearly as satisfying for me is the second match on Kayden’s Spotlight, in which he beats the shit out of hot little pro punk Kirk Donahue. Fuck, I hate that guy. I mean, sure, he’s got one of the sexiest middle weight bodies in wrestling. And, yeah, he’s a phenomenally talented pro wrestler. So, I confess, he ticks off every box that should make me worship his lusciously round ass. But despite all of that, the instant I see him in the ring, I’m cheering for his opponent to rip him to pieces and make him cry. Am I the only one with this much antipathy toward Kirk?

Clearly, I am not the only one, because Kayden tears him limb from limb with a certain relish that convinces me that, as is quite often the case, he and I are exactly on the same page. A clear difference between this match and Kayden’s match with Carter is how competitive this is.  Kirk drives Kayden to that point that I enjoy so much, with Kayden’s high pitch screams of desperation digging him a hole that most dominant heels don’t have the ego strength to climb out of. But Kayden does, and I love watching him climb, dishing out that much more vicious punishment for the trouble. I just so love questioning if Kayden can still pull a match out, and then watch him rise to the occasion and walk away with his heel credentials completely intact (and Kirk’s balls not).

Knocking that smirk off of Kirk’s face and making him scream like sniveling bitch alone would have earned Kayden the title!

The final match on Kayden’s Spotlight pits him against It-Boy Richie Douglas. Richie’s stock has been skyrocketing lately, because he’s ridiculously sexy and has slowly revealed a growing appreciation for the sexy side of wrestling. The mismatch in size is stunning. Kayden towers over the boy next door. There’s a sweet give-and-take momentum to the match, however, which feeds both my desire to see Richie improve and to see Kayden have to climb out of a hole.

Richie’s sell is the least compelling on this DVD, which only marginally detracts from the visual artwork that is watching Kayden pry him apart at the seams. The action includes a sweet mix of rapid fire momentum flips and long, succulent, crippling submission holds.  Richie is, indeed, improving in every match, and he’s just enough of a tasty challenge to hold up his end of the bargain as Kayden tells that sensational tale of getting upended and driven to the edge of despair, only to dig deeper into his bag of sadistic passion to plow an opponent under.

Kayden Keller’s Spotlight is beautifully consistent without a hint of redundancy. Each opponent brings a different set of assets and challenges that test the rising heel in unique ways. Challenge by challenge, Kayden sucks down the hard knocks and summons his inner heel to not just turn the tables, not just conquer, but to utterly defile the trio of beautiful babyfaces determined to knock him off as BGE’s hottest young heel. And maybe that day will come. But it is not this day!  This day, Kayden Keller is the heel in charge and, unquestionably, homoerotic wrestler of the month.