Dom Zacarro defended his claim to be the best, and his reputation as a legend killer, by pulling out a decisive victory over Mark Wolff. It’s the wrestling equivalent of a match that starts out competitively, but then about halfway through Dom starts steamrolling Mark until he’s in total control. You’ve got to read David’s blow-by-blow on that match in the comments. So fucking sexy! The OTK backbreaker beating the fuck out of Mark’s six-pack abs and double-fisted manhandling of Mark’s monster cock, alternating cock-punching and jacking him off, is what technically puts Dom over. But his post-victory tagging of Mark’s bulging pecs with Dom’s celebratory ejaculation is a sweet, sweet touch.

I’ve heard from readers predicting that big Dom may be unbeatable, which is fascinating when you consider his all-too-brief tenure in homoerotic wrestling. Calling him a legend killer is major inspiration for fan favorite legends to nip Dom’s ascendency in the bud before the Italian muscleman’s ego can swell as big as his gargantuan muscles. BGE’s Mikey Vee is the next classic fan favorite to step into the fray, both to be the best and to take revenge for Dom’s humiliation of Mikey’s former tag team partner, Mike Columbo. Mikey’s tenure in homoerotic wrestling is long, storied, and utterly dominating, but he’s stepping into the ring with Dom in his early career incarnation, with a full head of hair, granite carved torso, and truly legendary, luxuriously muscled ass. 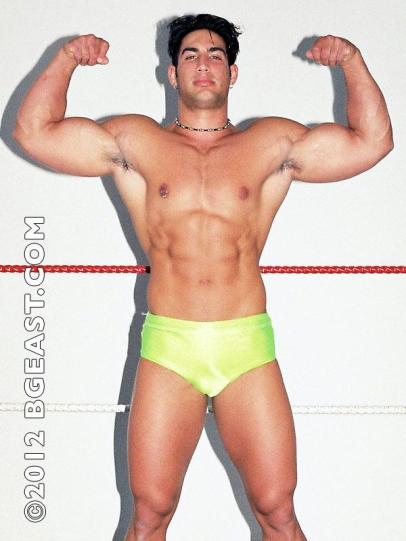 No rules, no ref, just muscled bodies and a pro wrestling ring and a battle for a submission or knockout. Vote for who you think emerges victorious, and comment below to describe the victorious finisher.

2 thoughts on “The Battle to Be the Best: Classics”