Tis the season for shiny, dangling balls, so what better way to celebrate than a new release starring long-time infatuation of mine, Joshua Goodman (that’s Mr. Joshua to you!!!).

Mr. J’s latest jaunt into the ring occurs on BG East’s new release Demolition 15.  He and his giant baubles square off against bewilderingly squashable Louie Lanza, a newbie that looks like Mr. Joshua could break in half with a stern look.  I know (really, I KNOW) to expect to be awed by Mr. J’s pendulous package.  I’ve appreciated its every bounce and wiggle, sway and swing in dozens of matches already.  I live in constant unrequited lust to see his trunk monster released from it’s bonds, so of course I’m prepared to be impressed all over again anytime he climbs into the ring or onto the mat.  And still, I experience a little gasp of shock when he shows up in those insanely tight plastic-wrap-style metallic silver trunks.

I love a good squash, mind you, so any compilation that includes Mr. J facing an achingly fragile-looking newbie who, let’s face it, just looks like he’s desperate to get his ass kicked, is going to be a crowd pleaser.  This is, in my estimation, a good squash.  Now, I prefer Mr. J in a more competitive scenario.  To be completely honest, I really, really prefer Mr. J outmatched, owned, and stripped naked by a hungry hunk guaranteed to be my personal hero for life, although that preference has never been fulfilled.  However, as he proves in his systematic destruction of lovely Louie, Mr. J carries off the role of muscle-bully exceedingly well.

I’m certain that my infatuation with Mr. J is far from exclusively explained by the mountain in the front of his trunks.  In fact, there’s something intoxicating to me about a man as aesthetically beautiful as Mr. Joshua being a nasty bully.  He’s so fucking pretty!  I love his proportions.  I love him smooth.  I swear, if you licked him, he’d taste like a peppermint patty (that sweet!).  So when he opens his mouth and out pours this torrent of scathing contempt, the soul crushing and unnecessary insistence on humiliating an obviously outmatched opponent… all delivered on a relentless IV drip of a hellishly sexy Boston accent… the contrasts to my senses are just so delicious.  The whole package (not just THE package) is just so thoroughly, beautifully, and uniquely Mr. Joshua.

Let me spare a word for lovely Louie, because although he gets absolutely and completely demolished, he’s got one thing going for him: he runs headlong into his humiliation.  What this kid’s story?!  He taunts Mr. J.  Now, let’s just review… little Louie (an inch shorter and 25 pounds skinnier) taunts powerhouse ring veteran, Mr. J.  He’s got nothing, nothing to put on the table to make this anything other than an uglyass obliteration (though both asses here are quite beautiful).  Now, he’s cute as a button (in a Jersey Shore kind of way), but that’s never been a weakness of Mr. J’s (someone needs to find Mr. J’s weakness!).  And even when Louie is basically getting his leg ripped off at the hip with his trunks yanked so high up his crack that you can almost see them down his throat when he opens his mouth and screams in pain, even then, Louie astonishingly taunts, “Is that all you’ve got!?”  I have two theories here.  1) Louie is a hardcore masochist.  I mean, he’s the sort of twink that likes straps and whips and hand crank electrical devices.  He wants to hurt.  He wants it really, really bad, and all he sees in front of him when Mr. J charges in is muscles expertly tuned to taking a piece of fluff like him to the limit of endurance.  And/or 2) Louie is a hardcore Mr. Joshua devotee (line starts right behind me, bitches!).  He’s watched Mr. J’s wrestling performances for years and wants nothing but to feel those hands on him.  He’s a Mr. Joshua freak who wants nothing but to know exactly how strong all of those muscles are (yeah, that one too, but he’ll have to keep guessing there…).  He’s nursing a Mr. J daddy-fantasy that, let’s face it, almost certainly was born the moment any of us saw Mr. J strap that studded collar around furious, but beaten Rocco’s neck and drag him into the private portion of the BG East facility to service his new master.
I like to think that Mr. J has a collection of lovely, lithe twinks with blond highlights at home, each with their own studded collars, thongs yanked up their cracks, and duties to perform in service of Mr. J.  Rocco, Chico Valdez, Randy Stanton, Jeremy Burk,  Austin Raines, now Louie Lanza, (hell, maybe that’s where muscle bunny beautiful Troy Baker disappeared to!?)… I picture them each in a thong, each charged with servicing Mr. J’s every whim morning, noon, and night. 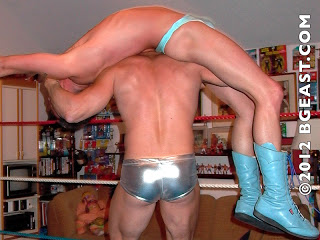 There’s nothing epic in Demolition 15 for Mr. Joshua’s storyline, as far as I can tell.  He hasn’t offered his wildly tappable ass for a bar conquest to compete for, as he did with Randy Stanton.  He isn’t facing down an astonishingly hands on, nearly unstoppable Napolean-complexed drill sergeant like he did with Gino Liotta.  There’s no upperclassman bully session turned shockingly on its head this time, like there was with Austin Raines.  It’s just little Louie caught between a rock and a hard place, over and over again, and soaking up every ounce of punishment he can take from expertly outfitted Mr. Joshua Goodman.  Happy holidays, indeed!