Skip to content
February 26, 2010July 1, 2013 wrestlebard
Closing ceremonies are this weekend, but the winter Olympics are just now seriously heating up. Of course the formal competition has been hard hitting, but I’m referring to stumbling across an homage to the beauty of the American winter Olympian bodies. In answer to the inspiring photo shoot of Canadian hardbodies, the Americans have this provocative answer.

The flag bearer for the team of American hunks is gold medalist snowboard crosser, Seth Wescott. Fantastic look here for Seth, with his low risers revealing the underwear and that solid, sculpted torso on display underneath his unbuttoned dress shirt. I simply have to imagine that Seth would be the one to slam Canadian snowboard crosser, Rob Fagan, in the center of the ring and then relish the joy of making him scream in pain as Seth drags him by his hair to have his head driven into each and every turnbuckle. Gold medalist, indeed.

Snowboard halfpiper, Louie Vito is built for pro-wrestling. Despite being only 5’4″, he’s got the look of a fabulous heel. He’s the champion sagger here, with his happy trail knocking at the door, and he’s displaying his fine ink with a cocky I’ll-soon-have-your-head-crushed-against-this-bicep look to him. In head to head, body to body competition with, say, naked Canadian freestyle skier Kyle Nissen, I’d have to give the edge to Louie delivering some acrobatic arial assaults that lay poor Kyle out cold. Then, of course, Louie would do an air guitar routine to celebrate, with his knee pinning the Canadian’s chest.

Silver medal ice dancer Charlie White has a seductive, sexy hunk babyface air about him here. Can’t you just picture him climbing through the ropes with his naive “good will win out” grin on his face as he pumps his fist, mugging for the crowd? How much more delightful it would be to see Canadian Warren Shouldice dive through the ropes and destroy the blond hero in complete humiliation. Warren’s over the knee backbreaker would set a fine table for a smorgasbord of torso punishment on the suffering babyface. Canadians would definitely claim a gold, bringing the medal count to 2-1 for the Americans.

Cross country skier Andy Newell also has a babyface hero look about him, which is ominous to see for those rooting for the Americans in this competition. Andy’s body looks lickable and good for light reading. He must have impressively sized balls to explain his showing off his modest bicep so proudly. I think Andy would put up an impressive fight against Canadian freestyle skier, Ryan Blais. In fact, I think this would be a close fought battle that would grow progressively nastier as babyface heroes get increasingly frustrated and decide to take short cuts that bend the rules. In the end, though, I’m picturing Andy dazed and disoriented following a series of a half dozen snap suplexes, allowing Ryan to hook the leg, get the 3 count, and then spit in Andy’s stunned face. Who knew the Canadians could get so fierce and nasty? Apparently making the medal count even at 2-2 is driving the boys from the North to new lows. 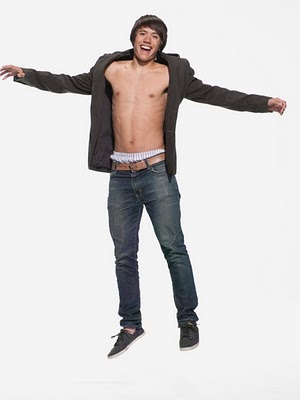 Oh my. Talk about babyfaces. 19 year old American speed skater, JR Celski looks like a lamb heading the slaughter here. Sadly, this pic is prior to JR’s fantastic pec ink that he put on display after a race in Vancouver recently, but still, it’s provocative to see the young stud looking like he’s about to jump right out of those jeans. Unfortunately for eager-beaver JR, if he were to find himself in the ring with Canadian speed skater, Francois-Olivier Roberge, he’d be nothing but a plaything for the Canadian. This would have the crowd aching for Francois-Olivier to put the kid out of his misery, but the Canadian would be sadistically prolonging the humiliation by yanking JR up by the hair repeatedly on the 2 counts. I think the Canadian would finally and decisively deliver the message that Canada is in it to win it with a bouncing, smiling torture rack. Canada would be up 3-2.

The final hope for the Americans to keep this respectable would rest in the hands of figure skater Evan Lysacek. I have to admit, I was a little surprised at just how hot Even looks here, including the provocative lightening tattoo pointing to his moneymaker. As evidenced by Evan’s gold medal performance in Vancouver, he is one cool cat when under pressure. Face to face with young Canadian speed skater Denny Morrison, I’m picturing Evan launching a highly scientific breakdown of the Canadian with patience and precision. Babyface Denny would be struggling to keep up, but Evan would stay one step ahead of him, concentrating on high impact moves to the lower back to leave young Denny writhing in pain and helpless to defend himself. All the momentum would be swinging Evan’s way, as he schoolboy pinned struggling Denny to his back in the center of the ring. Denny would struggle to pull his shoulders free, but the ref would count: 1… 2…. But just as overconfident Evan pumped out a double bicep to seal the deal, Denny would hook his gargantuan legs under Evan’s shoulders, flipping the American to his back and leveraging his superhuman quads to pin Evan’s back to the canvas for a shocking 3 count.
Whew! This is the competition I’ve been waiting for! The Americans fielded a fantastic team, but the Canadian’s managed to come out on top in 4 decisive victories. Go Canada!