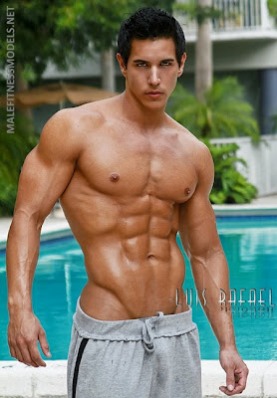 JoshH gave me a heads up that Rio Garza, who competes in fitness competitions as Alan Valdez, won the Model Universe 2012 Overall title last week! Our little boy is all grown up, and just like legions of homoerotic wrestling fans, the fitness model world can’t take their eyes off of Rio’s ripped, gorgeous body.

Reports are that Rio/Alan longs to be the most successful Mexican fitness model in history. While I’m no expert, I have to guess that he can check that box as he hoists his Model Universe trophy overhead. His proportions and fitness, particularly when he’s ripped, are superhuman! I’d expect to see a physique like this in the Louvre, or reclining in a toga on Mr. Olympus, so a Model Universe competition victory for this smoldering beauty seems somehow anti-climactic. 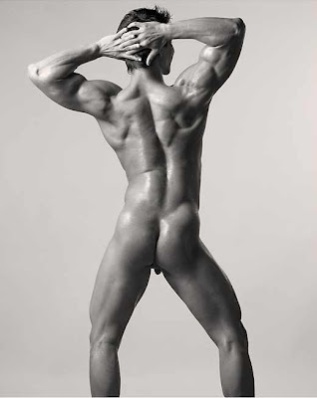 JoshH has mentioned to me often what an epic score it was for homoerotic wrestling fans when lovely Rio dipped his suckable toes into our corner of the pool. If you’ve lived under a rock for the past 3 or 4 years, you may not know that he’s wrestled for Rock Hard Wrestling (as Ray Martinez), for BG East, and for Can-Am. He’s featured in the just-past BG East catalog getting caught up in between some tough daddy-cub conflict in his self-titled Rio’s Bad Day. Rio’s Revenge is still on the list of “most popular titles” for Can-Am. Mr. Model Universe 2012 at the mercy of sadistic underground wrestlers putting on the show for gay eyes is, without a doubt, quite a score for homoerotic wrestling fans!

While Rio is living large on the stage of his fitness competition life, his journey through homoerotic wrestling products has been a tougher row to hoe.  It’s no wonder that every sadistic bastard in wrestling can’t wait to get their hands on his award winning physique. “Pretty” can be like a giant red target on the lickable ass of a fitness model, and muscleman lovely Rio is dripping with pretty.  Put him in the room with a couple of high flying indy pro veterans like Cameron Mathews and Paul Hudson, and just sit back and wait for the double team pec claw and neck breaker combo to bring godlike Rio to screaming, humiliated submission.

I’ve complained about Rio often not quite striking a selling combo of erotic and wrestling to fully satisfy my homoerotic wrestling fetish. However, his more recent appearances are scratching an itch that I’ve long longed for an ambitious Mexican fitness model to scratch. Exacting revenge on frequent tormentor Jobe Zander, the Latino adonis’ schoolboy pin, slapping down his junk on the throat of the notorious heel, is poignant homoerotic character development for an innocent, naive poser like Rio.  It seems like Jobe has finally, finally, finally awakened the beast, and whether Rio ends up on top or not, a fitness model flex with his balls dangling in his opponent’s face can feed my hunger for quite a while!

There’s probably nothing tastier for my taste buds than the first sight I caught of Rio wrestling, on the receiving end of a schoolboy pin this time, with the battering ram of my reigning favorite homoerotic wrestler, ripped red-headed musclegod Kid Karisma resting on his chin, in BG East’s Undagear 15. Rio’s wrestling “prowess” back then wasn’t what was yanking my chain, and the confrontation earned nothing but dripping contempt from the Karismatic one, whose tastes and opinions I tend to follow with somewhat worshipful adoration.  But the visual contrast of these two fantasy men, with rippling Rio coated in sweat and flat on his back with his jock-strapped ass cheeks vulnerably spread at the mercy of Kid K’s flexing physique does all sorts of wonderful things for me. With “legitimate” mainstream fame under his belt, I have to wonder if new release Rio’s days are numbered. Likely, they already were, I imagine, as the producers of new content dip into their unreleased catalog to keep muscle-in-trouble fans sated with suffering Rio. While his homoerotic wrestling career left me flipping through other pages at points, I whole heartedly agree with JoshH on two points: homoerotic wrestling fans were lucky to see his likes performing our fantasies, and he deserves a hearty congratulations and best wishes for more modeling successes to continue. Keep flexing, Rio!

One thought on “Chasing Rio”