Skip to content
September 29, 2012July 1, 2013 wrestlebard
There’s wildly exciting breaking news happening in the world of homoerotic wrestling.  First of all, BG East’s catalog 95 dropped yesterday.  It always feels a little like Christmas morning when the BG East catalog comes out.   This time around is no exception.  Let’s just run down the front runners for homoerotic wrestler of the month, which is, of course, the list of former homoerotic wrestlers of the month appearing in 95:
The Z-Man has a date with destiny against legit pro heel Dick Rick.  Dick’s expert hands on Z’s perfect physique!? Holy hell…
Cameron 2.0 is ripped to shreds and down to his underwear against a ripped, long, lean rookie in Undagear 19.  Damn, Cam’s body rocks, rocks, ROCKS!
Former homoerotic wrestler of the month Enforcer faces off (and clearly is turned on) by a definitely familiar physique in golden muscle stud, Maskador.
AND former homoerotic wrestler of the month Cage Thunder is on the same collection completely terrorizing a horrified, hardbodied rookie!
Denny Cartier is a former HWOTM appearing twice on Leopard’s Lair 4  (3 times, really, if you count the mat match and ring match against Aryx separately), against fellow former HWOTM, Aryx Quinn and how-has-this-kid-not-been-homoerotic-wrestler-of-the-month Russian muscle god sexy Alexi Adamov!
And finally, two former homoerotic wrestlers of the month go toe-to-toe when Jonny Firestorm appears to OWN Jake Jenkins’ luscious body in Jobberpaloozer 12: the Works!
So many stellar studs who’ve already proven that they’ve got the goods to command my lustful loyalty! And that doesn’t even scratch the surface of the depth of wrestling fantasy men in these new releases.  All signs suggest that BG East has put together another barnburner collection of scorching hot wrestling hunks to appeal to the varied and distinguishing tastes of wrestling kink fans!
And in another late breaking news flash, as Joe broke last night, a personal favorite fighter of both his and mine is generating buzz for his brand new fight sponsorship by asking, nay, demanding that everyone buy a shirt (or twenty) that supports his MMA career development.  Like Joe, I’m eager to support this hot young commodity, and like Joe I’ve already ordered my shirt.  You should, too, because there’s a fiercely dangerous young hot-head who you do NOT want to disappoint, waiting and watching for you to purchase one of his merchandise! 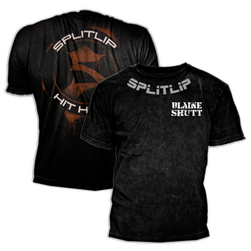