What’s the instant frontrunner in the competition for my favorite moment of 2013? My dinner last night with Lon Dumont.

In real life, Lon looks exactly like he does on camera. He just went in for a haircut a few days ago, so picture his coif from Tag Team Torture 15. He’s right in the thick of bodybuilding competition prep, so incredibly lean, tiny waist, angular facial features, slightly hollow-cheeked from months of extreme dieting. This was his first “re-feed” day in a while, meaning that after enduring on significantly low calories to carve out those hot muscles of his, yesterday was an “anything goes” eat anything and everything in sight day. In fact, by the time we met for dinner, he was looking a little green at the prospect of a full dinner. So he limited himself to a massive hunk of chocolate cake instead. 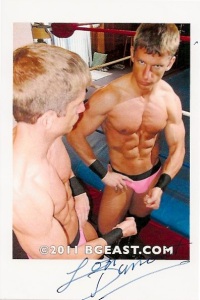 Me, I was just trying not to quiver with excitement the entire time. Look cool. Don’t say something stupid. Wipe that bit of drool from the corner of your mouth! I had a boatload of questions prepared, alternative lines of conversation plotted in case of awkward silences. However, nearly all of my planning went out the window when he not only reached out and shook my hand, but gave me a generous, firm, smiling hug of a greeting. I was instantly reduced to a gaping, wide-eyed Lon-fanatic, mentally trying to sear into my long-term memory the sensation of his hot bod pressing tightly against mine. Fortunately, my instant amnesia regarding all of the witty conversation points I’d prepared was negligible, because Lon is just so fantastically personable!

Our conversation ranged from wrestling and the people we know in common behind the cameras at BG East to politics to life goals to the minefield of negotiating romantic relationships. Happily, Lon and I appear socio-politically closely aligned, so commiserating about particular assholes in office kept us entertained a while. We discovered several unexpected things in common, like we were both history majors in college, and we’ve both had jobs working with older adults. Sure, there were occasional moments when the conversation dropped off and I found myself grinning like a dumbass, thinking to myself, “I’m sitting here chatting with Lon Dumont, for god’s sake!”  But I think he took my star-struck fumbling in stride. Of course, I knew much more to expect about him than he did about me. He confessed that he’d had some moments of wondering what he’d find when he showed up for dinner. I’m happy to report that I was not what he expected, apparently in a good way, and that the potential creepiness of sitting down with your #1 homoerotic wrestling fan for the first time face-to-face was apparently a pleasantly enjoyable surprise for him as well. 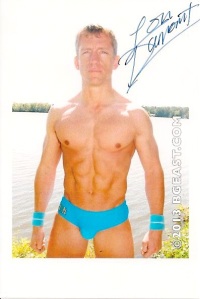 Of course, I would have enjoyed milking this momentary brush-with-fame for hours on end, but soon enough the night was clearly starting to wrap up. I finally remembered my agenda, and a little sheepishly asked if he’d consent to give me an autograph.  “Sure!” he said in that same big, booming, enthusiastic voice he has in the ring.  “How about a few autographs?” I asked, with a hint of pleading in my voice as I pulled out my stack of BG East DVD covers and the choice half a dozen or so photos I was able to whittle down from my favorite hundred of mouthwatering Lon pics. He laughed, and said, “Of course!,” explaining that he hadn’t expected to be giving out autographs on his trip.  I gave him my most incredulous look (you know, one eyebrow arched), and told him that he certainly should have expected it!  We agreed that being plied for autographs ought to be something he faces everyday. 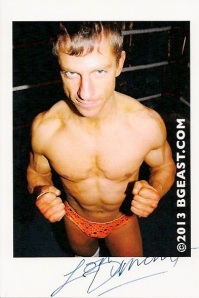 Having Lon lend his signature to my pics of him was this awesomely intimate moment for me. Showing the object of my infatuation the particular shots, angles, and looks of his that rise to the top of my cherished images felt so fantastically intense! He chuckled and agreed with my choice of a particular shot that’s also one of his favorite images from his BG East work. When he got to the g-g-g-g-g-gorgeous pic of him from behind in Rookie Wreckers, as he’s nearly cutting Morgan Cruise in half with his breath-stealing bodyscissors, Lon laughed out loud. Yep, there’s no disguising precisely why I love that shot: the bulging tricep, that stunningly sculpted back, those beautiful hamstrings flexed like a vice around his suffering opponent… and of course, perfectly centered in this shot, Lon’s hot, flexed glutes!

The night took a tragic turn right after Lon reminded me that we simply had to get a photo of the two of us with my iphone (as if I’d have to be convinced!). I grabbed my phone, turned the camera to selfie, leaned in for a close up of the two of our grinning faces, and pushed click. And my phone instantly ran out of batteries. Seriously, I was nearly brought to tears.  If it hadn’t been too humiliating to weep in front of my #1 homoerotic wrestling infatuation, I’d have been reduced to bawling. Lon suggested that this was certainly proof that if there is a god or gods, they’re cruel bastards. His clear understanding of the magnitude of this tragedy consoled me.

There’s a reason that Kid Leopard refers to Lon as “one of my favorite people in the world.”  Lon is just a delightful guy, smart and thoughtful, kind and generous.  Honestly, there’s something almost unsettling about getting to know a bit about the person who has been such a long-time object of lustful infatuation. Knowing what a complex and insightful human being he is almost makes me wonder if I may struggle when it comes to continuing to lustfully objectify him.

My thanks to those of you that gave me some last minute advice yesterday before I headed to my dinner with Dumont.  For those of you who offered suggestions regarding what I should ask him, let me give you the quick answers. He wore a hot, tight, beige, 3-button crew t-shirt that nicely stretched across his shoulders and pecs. I’m pretty sure he was on a carbohydrate-induced high from a day of sucking down food, so although he wasn’t actually drunk on alcohol, I suspect he was riding at least a little sugar-buzz. Like I said, I went with a modest stack of photos and DVD covers for his autograph, and fortunately he was game to sign them all. And Alex Miller, Lon had no words of wisdom about your household sponges, that itch of yours, or your water pressure. Sorry!

I’m hoping to convince Lon to forward some new photos of his rocking hot body as he approaches peak conditioning for his upcoming competitions. And I’ve made him promise that we’re doing this whole thing again next time he comes through this way, and I’m bringing 5 cameras and 2 dozen back-up batteries with me!

5 thoughts on “Dinner with Dumont”