I harbor a well-known and oft-analyzed infatuation with the hunks of television news.  Actually, I don’t think it’s much of a mystery that television news has been sexing things up, including promoting hot hunks of eye candy to be lusted over while ostensibly being informed of world events.  A couple of my favorite newsboy crushes came across my desk in the last couple of days, reminding me of some of my fondest homoerotic wrestling fantasies. 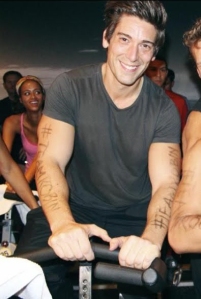 Kenneth in 212 shares my infatuation with ABC’s weekend anchor and Abercrombie poster boy, David Muir.  Here’s a random shot of Muir’s beautiful, bulging arms, for which I have (and Kenneth provides) zero context, but who the hell cares?  Picture those guns locked and loaded around the waist of Carter Evans in a vicious pro wrestling ring battle in my homoerotic wrestling imagination! 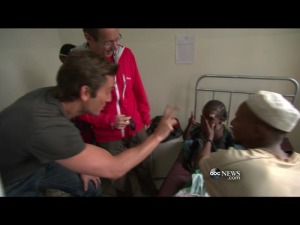 David shows off more of those naked arms, making weeping Ethiopian post-op children somehow become background for my lustful fantasies.  I know, that’s fucking messed up, and I blame the commercialization of network news entirely. Those sick bastards.

Now that you’re remembering the warm feeling that I (perhaps you) get when David Muir wears a deep v-neck, short sleeve t-shirt, let’s up the ante with a more specialized taste in newsboys: my longstanding infatuation with Carter Evans.

Carter recently posted this clip of him surfing, (one of 2) from the point of view of the nose of his surfboard, letting us watch this hot stud get soaked in a wet suit and look smooth as butter working his board.

Baby, look at that ass as he squats low and rides that wave. 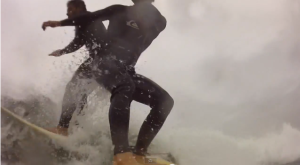 And when that motherfucker runs into him mid-ride about halfway through the clip, watch him throw the fucker over the top of the wave without so much as needing to adjust his stance as he just keeps riding. Damn, that boy’s alpha!

If you haven’t been paying attention, scenes like this have inspired appearances from both Muir and Evans in my homoerotic wrestling fiction series, Producer’s Ring, which features an entire subplot devoted to my lustful imaginings of what the increasingly beautiful boys of news could do if homoerotic wrestling ruled the world. In fact, considering Carter’s clear beach proclivities, how unknowingly appropriate it was that I set his first foray into homoerotic wrestling on the beach.

One thought on “News Break”