Our mystery man inside at a recent taping for BG East smuggled me more photos of hot young hunks before, during, and after some rowdy wrestling action in the Florida sunshine.

Jonny Firestorm was in the pool, looking happy to keep his Custom Combat demolition of Drake Marcos rolling with a wet ‘n’ wild rack. You’d think after the terror he subjected Drake to in Custom Combat (over and over and in infinite variations), young Drake would steer clear of Jonny. Then again, I sort of get the impression the Cheshire Cat of homoerotic wrestling may get off on soaking up punishment about as much as Jonny does dishing it out.

Is it my imagination, or is Jonny looking sexier than EVER!? There’s a look of trust as he hams it up for the camera.  Clearly Jonny knows who’s taking is picture, but we don’t.  Hmmmmm…. 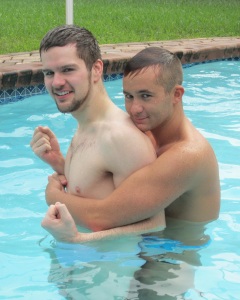 Our man inside, risking life and limb, also included some provocative pics of fresh young sprouts who haven’t even seen the light of day in a BG East release yet!  I love a preview bleacher report!  I asked for a lot of details, but all I got back regarding my questions about these two sexy young things is that the bearded beauty goes by “Wolf,” and the seductive, tanned babyface here goes by “Ty.”

The camera captured the beautiful newbies exchanging rear bearhugs. Whereas Ty’s bearhug looks playful, Wolf looks like he’s intent on seriously controlling his competition. They both look hungry to me, and I’m instantly feeling impatient to see these two adorable rooks debut. 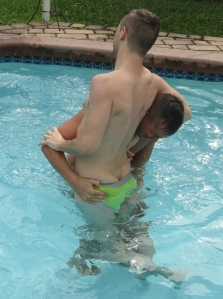 It looks like Drake got his hands on the fresh meat as well.  It seems like just yesterday I was popping my cork in excitement over smuggled photos of Drake, before we’d ever seen the stud’s BG East debut. Now he’s the relatively seasoned upperclassmen putting newbies like Ty through the ringer. Then again, it looks to me like Ty may be right about to peel Drake’s trunks off, making me think this rook very well could be a big crowd pleaser!

Since the Boss left a comment on my last post, and since that comment was not the promise of heads rolling, I’ll take it that he’s not too upset with the contraband that our mystery man smuggled out.  But then again, I do have one more batch of photos still to share….

One thought on “Our Man Inside”